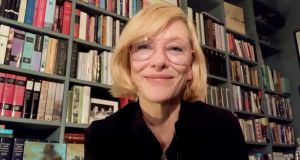 Chainsaw accident: Cate Blanchett before the incident, in May. Photograph: Getty for BAM

Cate Blanchett has sustained a cut to the head following a chainsaw accident at her home in England.

The Oscar-winning actor, who relocated from Sydney to Sussex, between London and the south coast of England, last year, was asked how lockdown was going by the former Australian prime minister Julia Gillard on her podcast last week.

“I’m fine,” said Blanchett. “I had a bit of a chainsaw accident yesterday, which sounds very, very exciting, but it wasn’t. Apart from the little nick to the head, I’m fine.”

Gillard replied: ‘Be very careful with that chainsaw. You’ve got a very famous head, I don’t think people would like to see any nicks taken out of it.”

Blanchett, who is 51, lives with her playwright husband, Andrew Upton, and their four children just outside the town of Crowborough, in a manor house once owned by Arthur Conan Doyle, the Sherlock Holmes creator. The actor had taken much of the year off to help her eldest son through his A levels.

“And then all of this exam stuff evaporated [because of school closures] and I’m left with an 18-year-old who doesn’t really want to have anything to do with me,” said Blanchett. “So it’s a little bit discombobulating, but it’s a high-class problem; we’re all well.”

The actor said she was instead home-schooling her five-year-old daughter, “which is just as challenging. I have a huge respect for the teaching profession. I always have.”

Blanchett’s next project will be Nightmare Alley, a thriller costarring Bradley Cooper, Willem Dafoe, Toni Collette and Rooney Mara, based on the book by William Lindsay Gresham. – Guardian