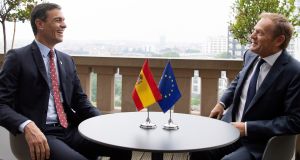 European Union leaders aim to wrap up a tortured job selection process on Sunday in their third attempt to decide who will take over the bloc’s top five posts and set policies affecting the lives of some 500 million Europeans.

With France and Germany at odds over not just the candidates but the selection rules themselves, diplomats say a Tuesday deadline to choose the head of the European Parliament has given urgency to a task that could otherwise drag on for months.

“What we’re looking for is a team which has legitimacy, energy, is competent and has the support of the Council and European Parliament,” France’s European affairs minister Amelie de Montchalin said.

“But if we enter into this discussion with our national flags, in a competition of nationalities, we lose the European spirit.”

EU leaders, including Taoiseach Leo Varadkar, hope to agree to a deal over dinner on Sunday evening but have also scheduled a breakfast on Monday, mindful that the new European Parliament holds its first session on Tuesday in Strasbourg and needs a president.

Facing accusations of being out of touch with citizens, European leadrs have sought to line up the best performers in May’s European Parliament elections for most of the top jobs.

Under that plan, German centre-right politician Manfred Weber would take the European Commission presidency, as the European People’s Party won the most seats in that vote.

But France’s president Emmanuel Macron has rejected the ‘Spitzenkandidat’ system supported by German chancellor Angela Merkel, who for her part has refused to give it up.

Spanish prime minister Pedro Sanchez suggested starting from scratch after an inconclusive second attempt at a summit earlier in June. Many governments want a balance of men and women and to avoid the top jobs going to members of western EU governments.

One emerging compromise, two diplomats said, was to allow Mr Weber to become European Parliament president and give the commission job to Dutch Socialist Frans Timmermans, who France and Spain strongly support.

“Both Spitzenkandidaten are part of the solution - that is very important. As things look now, it won’t come to an institutional conflict,” Dr Merkel told reporters after the G20 summit in Osaka, Japan.

But Mr Timmermans, a deputy head of the commission and a former Dutch foreign minister, is unpalatable to eastern EU states such as Hungary and Poland for his role in EU rule of law inquiries against their nationalist governments.

For investors and financial markets, the most crucial choice is president of the ECB, which sets interest rates for the eurozone. France could be given the post, one EU diplomat said, naming Francois Villeroy de Galhau, who is governor of the French central bank. Erkki Liikanen, a former Finnish central bank chief, is also a candidate to succeed Mario Draghi.