Guatemala opens Jerusalem embassy in wake of US move 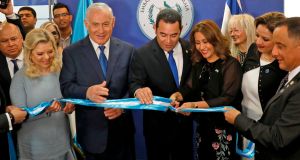 Guatemala opened an embassy in Jerusalem on Wednesday, two days after the United States inaugurated its new site in the contested city in a move that infuriated Palestinians and drew international condemnation.

Israeli troops shot dead dozens of Palestinian protesters on the Gaza border on Monday when the high-profile opening of the US embassy to Israel in Jerusalem by the administration of President Donald Trump raised tension to boiling point after weeks of anti-Israeli demonstrations.

Guatemala was one of only a few nations that backed Trump’s decision in December to recognise Jerusalem as Israel’s capital and is only the second country to move its embassy to the holy city. Paraguay said it will move its embassy from Tel Aviv to Jerusalem by the end of May.

The status of Jerusalem is one of the thorniest obstacles to forging a peace deal between Israel and the Palestinians, who with broad international backing want East Jerusalem, captured by Israel in the 1967 Middle East war, as their capital.

Israel regards all of the city, including the eastern sector it annexed after the 1967 conflict, as its capital. The Trump administration has said the city’s final borders should be decided by the parties.

‘Wrong side of history’

Senior Palestinian negotiator Saeb Erekat said: “The Guatemalan government has chosen to stand on the wrong side of history, to side with violations of international law and human rights, and to take a hostile step against the Palestinian people and the Arab world.”

Most world powers do not recognise Israeli sovereignty over the entire city and says its final status should be set in peace negotiations.

Palestinian leaders said by relocating the embassy, the US had created incitement and instability in the region, and abrogated its role as a peace mediator.

Palestinians have been demonstrating on the Gaza frontier for the past six weeks, demanding a return to family land or homes lost to Israel when it was founded in the 1948 Middle East war.

On Wednesday, a day after expelling Israel’s ambassador in response to the Gaza deaths, Turkey ordered the Israeli consul general in Istanbul to return home.