May invites Conservative MPs to briefings to discuss Brexit 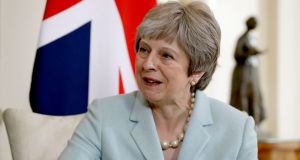 British prime minister Theresa May said there were flaws in both customs models being considered by the government. Photograph: AP

British prime minister Theresa May has invited all Conservative backbench MPs to private Brexit briefings in Downing Street on Tuesday, as she tried to stop a row over Britain’s future customs relationship with the EU tearing the party apart.

Ms May admitted there were flaws in both the customs models being considered by the government, a view reinforced by Michel Barnier, the EU’s chief negotiator, at a foreign affairs meeting in Brussels.

Ann Linde, Sweden’s Europe minister was quoted by RTÉ as saying: “Michel Barnier said [to foreign ministers] that the two British proposals the Cabinet is disagreeing about - none of them are realistic.

“So he thinks it’s unnecessary to fight about it, as none of them are realistic, no matter which one they choose.”

Ms May is being urged by senior Tories to abandon her support for a so-called “customs partnership” with the EU, with hopes rising in Eurosceptic circles that the prime minister will switch her support to their favoured option.

Ms May’s chief of staff Gavin Barwell gave Tory MPs what one called “a technical briefing” on the advantages and flaws of the two customs options being considered by ministers and which have split the cabinet.

The prime minister has abandoned hopes of resolving the issue this week, but is hoping to finally agree a favoured customs proposal next week. “This is complex stuff,” said one aide. “This was a chance to explain the issues and take questions.”

Ms May’s preferred option - a “new customs partnership” under which Britain would collect tariffs on behalf of the EU - was rejected by a majority of her inner Brexit cabinet earlier this month. Boris Johnson called it “crazy”.

Pro-Brexit ministers, including Mr Johnson, back a “maximum facilitation” plan that would create a customs border between Britain and the EU, including in Ireland, but use technology and “trusted trader” schemes to smooth trade.

The political mood appears to be shifting towards the latter option, even though the EU has warned that it would not address its demand that there should be no hard border in Ireland.

Damian Green, Ms May’s former deputy and a close ally for many years, suggested on Sunday that a form of “max fac” could emerge as the preferred option, but that Britain might have to stay in a customs union while the technology was developed.

British chancellor Philip Hammond is also said by colleagues to be willing to consider that approach, although he remains worried about the impact of any customs border on British companies trading with the EU.

Greg Clark, the pro-European business secretary, paid a visit to Svinesund on the Norway-Sweden border on Monday morning to examine how customs arrangements work there.

“Greg wanted to see it to get a proper understanding of how an example of ‘max fac’ could work in practice, and it was definitely not without friction,” said one ally.

“Britain is being held to ransom by demands for a hard Brexit, severing links with the customs union and single market,” Mr Miliband said.