Children of the Six-Day War: Israeli settlers in the West Bank

Fifty years after a military campaign that stunned Egypt, Syria, Jordan and Iraq, communities of many kinds live beyond the Green Line 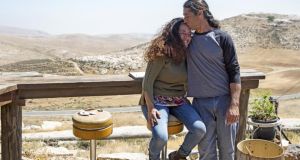 Israeli Jewish settlers Noam and Tehilla Cohen in the West Bank Jewish settlement of Neve Erez: “I didn’t come here because of ideology but it suits my ideology,” says Noam. Photograph: Heidi Levine

A few months after the end of the Six-Day War, the Israeli government of Levi Eshkol gave permission to a group of citizens to re-establish the community of Kfar Etzion, south of Bethlehem, at the site of a kibbutz that had been abandoned during heavy fighting with Jordanian forces in 1948.

The settlement by Jews of the West Bank was under way.

While the left-wing Labor Party, which ruled Israel in the decade following the war, was primarily interested in establishing small agricultural communities along the strategically important Jordan Valley border, religious Jews wanted to settle close to biblical sites in the West Bank, which, they believe, was granted by God to the Jewish people for eternity.

The victory in the 1977 election of Menachem Begin’s right-wing Likud party, a watershed moment in modern Israeli politics, spurred an unprecedented growth in government-backed settlement activity throughout the West Bank.

Fast-forward 50 years from 1967 and, despite the fact that the international community considers all West Bank Jewish communities illegal, and notwithstanding widespread support among Israelis for a two-state solution under which the West Bank, along with Gaza, would become an independent Palestinian state, the settlement enterprise continues to flourish.

Today 730,000 Jews live beyond the Green Line, Israel’s pre-1967 border – 430,000 in the West Bank and 300,000 in Jewish neighbourhoods in east Jerusalem – comprising 13 per cent of the Israeli population. There are 121 Israeli government-sanctioned settlements and more than 100 unauthorised outposts, usually smaller hilltop communities, which are not sanctioned by Israeli authorities.

For the 2.8 million Palestinians living in the West Bank, the settlements are both inflammatory symbols of the occupation and life-altering realities involving confiscation of land, restrictions on free movement and access, and huge economic cost.

In contrast to the media image, the settler community is a mosaic, and most settlers are not gun-toting religious militants. Approximately a third are secular; a third are ultra-Orthodox, with only the remaining third identifying as religious- nationalist, for whom living in the biblical Land of Israel was a prime motive for moving beyond the Green Line.

Noam Cohen’s dream when he moved to the Neve Erez outpost, northeast of Jerusalem, was to create a farm in the desert. Today, Cohen (49) also has a music recording studio, raises bees for honey and rents out a B&B.

“I didn’t come here because of ideology but it suits my ideology. In fact, my wife used to be very left-wing but after moving here she changed her views,” says Cohen.

Neve Erez is built on a hilltop at the edge of the Judean desert on the road that descends to the river Jordan. The views are stunning and Cohen, like most of the residents, says he wanted an alternative to city living. The community, a 20-minute drive from Jerusalem, was founded in 1999 and has grown to 25 families – an eclectic mix of small-scale, new-age eco farmers, musicians, artisans and artists.

Although Neve Erez remains an unauthorised outpost, the Israeli authorities pave roads and provide water and electricity to the hilltop.

Palestinians from the nearby village of Mikhmas farm the land around the outpost but there is little interaction between the two communities.

Neve Erez has no security fence and only three residents carry guns. An Israeli army patrol occasionally stops by. Despite the tranquillity, Cohen believes there will never be genuine peace with the Palestinians.

“For the Palestinians there will only be peace when there are no Jews here. There will never be a Palestinian state but if such a state was established I would move back to Israel. We came here to live in our historic homeland, not to be foreigners.”

Israel’s ultra-Orthodox families tend to be very poor with a large number of children and many have difficulty accessing affordable housing. The solution for right-wing governments, seeking to boost the number of settlers, has been to build ultra-Orthodox communities over the Green Line.

Daniel Goldzweig (49), a father of eight, moved to Israel from Chile in 2010, and works as a deputy manager in the local mini-market. “We were attracted by the quality of life and the ultra-Orthodox lifestyle with everything closed on the Sabbath. It’s worth the risk of the political uncertainty,” says Goldzweig. “If there is ever a peace agreement and we have to leave here, then I will leave but that doesn’t mean I will support it.”

A six-room apartment in Tel Tzion sells for between €250,000 and €375,000, significantly cheaper than an equivalent-sized home in ultra-Orthodox neighbourhoods in Jerusalem or Tel Aviv.

Maria Mitskoun (31) wasn’t attracted to the West Bank because of the area’s biblical roots: she’s not even Jewish. She grew up in Russia in a secular Christian family but was entitled to emigrate to Israel with her Jewish husband. Two years ago, pessimistic about their prospects in Russia, the couple decided to move to Ariel, a settlement city in the heart of the northern West Bank, with a university and a thriving industrial park.

The main attraction was the fact that more than 40 per cent of Ariel’s 20,000 residents are Russian speakers from former Soviet Union states.

“We didn’t know the [Hebrew] language, in fact we didn’t know anything, but here there are Russian-speakers everywhere,” Mitskoun explained. “Assimilation was easy and this is a great place to bring up our five-year-old son. Now we consider Ariel home. We don’t even think about the fact that it’s in the West Bank.”

Katja Epelbaum (44) is also a new immigrant, from Paris, but she deliberately sought a smaller community and, as an observant Jew, was attracted by the West Bank’s Jewish heritage.

She chose to move five years ago, with her husband and two daughters, to Eli, a mixed religious/secular settlement of 5,000 people. It lies southeast of Ariel, close to the main route 60 highway which runs the length of the West Bank. “We felt the need to come back to our roots, to our homeland and to a quiet place in the countryside. Paris is more of a conflict zone than here and it’s getting worse there for Jews. It’s a fresh start and I feel I’ve truly discovered myself here.”

Epelbaum feels safe in Eli but wouldn’t dream of entering the nearby Palestinian villages.

“For me the 50th anniversary of the Six-Day War is a miracle – after 2,000 years without a Jewish state, Judea and Samaria [the name some Israelis use to refer to the West Bank] are part of Israel. Out of our window we can see Shilo, where the children of Israel came after 40 years of wandering in the desert, bringing the biblical Tabernacle with them.”

Eighty Jewish families from France live in Eli and Epelbaum doesn’t intend to leave. “If there’s a Palestinian state, why shouldn’t we stay here? As long as it’s safe.”

The Six-Day War and its aftermath

On the morning of June 5th, 1967, 200 Israeli planes took to the skies, flew under enemy radar and destroyed almost the entire Egyptian air force while it was still on the ground.

Within an hour the ground assault began on the Egyptian Sinai. Air strikes against Jordan, Syria and Iraq followed in the afternoon, granting Israel air supremacy as battles raged in the Sinai, the Golan Heights and the West Bank.

Six days later, after one of the most devastating military campaigns in modern history, Israel had captured the Sinai peninsula and the Gaza Strip from Egypt, the Golan Heights plateau from Syria and the West Bank and east Jerusalem from Jordan. The territory conquered was more than three times the size of pre-war Israel.

The apocalyptic atmosphere in Israel before the war turned to unprecedented joy as Israelis came in droves to visit Jerusalem’s “liberated” Old City, which had been under Jordanian control since the establishment of the state of Israel in 1948.

For Egyptian leader Gamal Abdel Nasser and the Arab world, the war was a disaster. A direct result of it was the galvanisation of Palestinian nationalism, the demand for an independent Palestinian state and the realisation that the Arab states could not be relied on to achieve this goal.

The entire Sinai was returned to Egypt under the terms of a peace treaty signed in 1979, when Egypt became the first Arab state to make peace with Israel.

In 1980 the Israeli government of Menachem Begin annexed east Jerusalem and in 1981 it seized the Golan Heights – two actions that were condemned by the international community.

In December 1987 the Palestinians rose against Israeli rule in the West Bank and Gaza in the first intifada. The following year Jordan’s King Hussein relinquished claims for sovereignty over the West Bank, supporting an independent Palestinian state.

Under the terms of the second Oslo Accord signed by Israel and the Palestine Liberation Organisation in the 1995 , the West Bank was divided into three areas: Area A under the control of the Palestinian Authority: Area B , under Palestinian civilian and Israeli military control, with Area C – comprising 60 per cent of the West Bank – remaining under full Israeli control.

Later talks on a comprehensive peace agreement and the establishment of a Palestinian state ended without a breakthrough three years ago.

Under the terms of a 2005 disengagement, Israeli forces left Gaza, uprooting 8,000 Jewish settlers in 21 settlements, leaving the area under the control of the Palestinian Authority before Hamas seized power in 2007.Due to Israeli and Egyptian border restrictions, and an Israeli air and sea blockade, Palestinians in Gaza are not free to enter or leave the territory.

Friday: How Israel’s occupation of the West Bank impacts on almost every aspect of day-to-day life for Palestinians