Populist ex-premier Aleksandar Vucic sworn in as president in Serbia 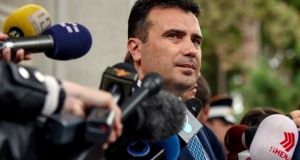 Macedonia’s prime minister-designate Zoran Zaev has vowed to lead his country out of a bitter and sometimes violent political crisis and towards EU and Nato accession, as deputies debated his plans for a controversial new government.

Parliament in Skopje was expected to approve a cabinet comprising Mr Zaev’s Social Democrats and two ethnic Albanian parties by a deadline of midnight on Wednesday, despite opposition from the nationalist VMRO-DPMNE party that has ruled Macedonia for a decade.

Thousands of people joined recent nationalist-led rallies in Skopje against the proposed coalition, claiming it would do the bidding of Albania and weaken Macedonia’s unity to the point of possible collapse.

The scenes of bloodied politicians cornered by a baying mob stoked fears of a wider crisis in Macedonia, but western pressure appears to have persuaded President Gjorge Ivanov to drop his earlier opposition to the coalition cabinet.

The three parties that plan to form the new government have 62 seats in Macedonia’s 120-seat parliament, and they are also expected to enjoy the backing of a third ethnic Albanian party on many major issues.

The EU and US have expressed strong support for the coalition, while Russia has accused the West of conspiring with Albania’s leaders to install a government in Skopje that will help carve up the Balkans in pursuit of a “greater Albania”.

Fears of ethnic conflict still haunt the Balkans after the wars of the 1990s, and Macedonia spiralled towards civil war in 2001 until a Nato-brokered deal ended an insurgency by rebels demanding more rights for ethnic Albanians, who make up about a quarter of the country’s population of two million.

“It is time to have the institutions work for the citizens . . . Macedonia will be a state of all its citizens,” Mr Zaev told parliament, according to the country’s MIA news agency.

Macedonia’s progress towards both alliances has been blocked by anger in Athens over the country’s name, which it shares with a northern Greek province.

The West was also alarmed by lurid allegations of corruption that swirled around leading members of the VMRO-DPMNE party and their associates, who are the focus of major investigations that Mr Zaev said he wants to see continue.

In neighbouring Serbia on Wednesday, populist ex-prime minister Aleksandar Vucic was sworn in as president.

“We must create a region where differences are an advantage and not the basis for clashes,” he told parliament in Belgrade.

“There have been enough burials in the Balkans”.