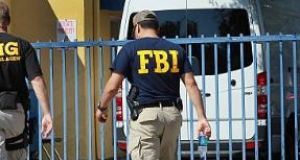 The Federal Bureau of Investigation’s New York office said agents had arrested about 20 people on Wednesday in an organised crime bust. Photograph: Getty

Federal agents in New York on Wednesday arrested the alleged leaders of the Lucchese crime family, a network of criminals who were the source of inspiration for the acclaimed mobster film “Goodfellas.”

Defendants with nicknames including “Paulie Roast Beef” and “Joey Glasses” were among 19 people charged with crimes ranging from murder to the illegal sale of cigarettes, the US Attorney’s Office for the Southern District of New York said in a statement.

The most prominent defendants were Matthew Madonna, 81, a suspected street boss for the Lucchese family, Steven Crea Sr, 69, also known as “Wonder Boy,” who is a suspected underboss, and suspected consigliere Joseph DiNapoli, 81.

Prosecutors say the trio make up the Lucchese family’s administration, otherwise known as its top-ranking members.

The crimes were committed in connection to a larger racketeering scheme run out of New York and dating back at least 17 years, prosecutors said.

The Lucchese family is considered to be one of five long-established Mafia organiations that operate in New York City and New Jersey, also known as La Cosa Nostra, which originated in Italy.

“As today’s charges demonstrate, La Cosa Nostra remains alive and active in New York City, but so does our commitment to eradicate the mob’s parasitic presence,” acting US Attorney Joon Kim said in a statement.

Of the 19 defendants, 15 were taken into custody from neighbourhoods across New York and New Jersey, prosecutors said. The four other defendants were already imprisoned on other charges.

“Their crimes aren’t victimless, and this case proves they’re willing to use murder and many other violent tactics to enforce their dominance,” FBI Assistant Director-in-Charge William F Sweeney Jr said in the same statement.

The Lucchese family was suspected of pulling off the notorious 1978 airport heist that inspired Martin Scorsese’s 1990 Academy Award-winning film Goodfellas. That $6 million heist remains one of the most infamous unsolved crimes in the United States.

A spokeswoman for the Federal Bureau of Investigation’s New York office said agents had arrested about 20 people on Wednesday in an organised crime bust. More details about the charges and arrests would be released later in the day, the FBI wrote on Twitter.

Attourneys for the defendants could not immediately be reached for comment.

Just In: Approximately 20 arrested this morning in an organized crime bust. Details to follow.