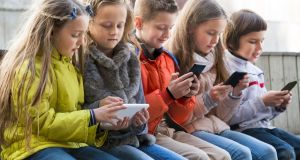 “A significant number of young people had problems to control their own internet use in a self-determined way,” the study by the German federal drug agency said. Photograph: istockphoto

Now the scale of the problem is laid bare, with a study commissioned by the German federal drug agency suggesting 28 per cent of children in the country either are addicted to their smartphone, or soon will be.

“Children who are left alone too early in the virtual world can develop health problems as a result,” said Marlene Mortler, the federal commissioner for drug-related issues. “Some become hyperactive or aggressive and, in others it can lead to internet dependency.”

The study asked 80 selected German paediatricians to collect information on almost 6,000 of their young patients, asking them and their parents about their smartphone and tablet use.

Projecting from the results, 600,000 children show signs of smartphone addiction, while a further 2.5 million display problematic behaviour signs. The study results showed that 70 per cent of kindergarten-age children play with their parents’ smartphone for more than half an hour daily and just 10 per cent are monitored when they do so.

Some 70 per cent of older children with long-term smartphone exposure were, according to their parents, only able to amuse themselves for two hours without seeking out digital devices. Researchers also saw a link between excessive smartphone use and higher consumption of sweets.

“A significant number of young people had problems to control their own internet use in a self-determined way,” the study adds.

Dr Uwe Büsching, co-author of the study, said clear rules are the best response to the survey’s findings: smartphone-free meals, no smartphone before the 12th birthday and automatic shut-off after a defined time.

“Prescribing ergo- and speech therapy early on cannot advert the dangers,” said Dr Büsching, calling on doctors to include questions about digital media usage in early check-ups and case history.

The federal drug commissioner called for further research into the phenomenon of smartphone addiction but said parents played a key, frontline role in pointing out the risks and benefits of smartphone use.

“They have to act as a role model in accompanying children in the digital world,” said Ms Mortler.