Corbyn piles pressure on absent May in UK election debate

Labour leader Jeremy Corbyn clashes with Amber Rudd, who was appearing in the place of British prime minister Theresa May, during a televised UK election debate. Video: Reuters 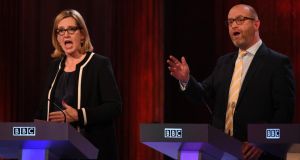 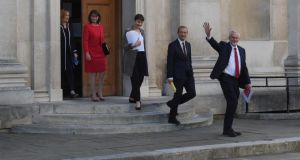 Jeremy Corbyn and other opposition leaders piled pressure on the Conservatives in a televised debate on Wednesday night, warning voters against giving Theresa May a blank cheque next week. The prime minister stayed away from the debate, leaving home secretary Amber Rudd to face questions from an audience that was sometimes hostile and derisive.

Mr Corbyn’s last-minute decision to take part in the BBC debate in Cambridge was designed to wrong-foot Ms May by portraying her as running scared of a confrontation with him. But Liberal Democrat leader Tim Farron, whose party has struggled for attention during the campaign, was the first to draw attention to the prime minister’s absence.

“Where do you think Theresa May is tonight? Take a look out your window. She might be out there sizing up your house to pay for your social care. And why do you think she called this election? She wants five years as prime minister and she thinks you’ll give it to her, no questions asked – literally,” he said.

Others accused the prime minister of arrogance, with Green co-leader Caroline Lucas declaring that “the first rule of leadership is to show up”. Scottish National Party (SNP) deputy leader Angus Roberston said the prime minister had put her party before the country in calling an election because she thought she would win a massive majority, describing her as “not so much the Iron Lady as the U-turn Queen”.

Ms Rudd, put in a tough performance, focusing her fire on Mr Corbyn, but she failed to rebut criticism of the Conservatives’ record, particularly on public services and the difficulties faced by those on low incomes. She repeatedly accused Mr Corbyn of believing in a “magic money tree” but the Labour leader won applause when he suggested she was unfamiliar with the reality of poverty.

“Amber, have you been to a food bank? Have you seen people sleeping around our stations?” he said.

Ms Rudd said the central question in the election was who should negotiate with the European Union on behalf of Britain, Theresa May or Jeremy Corbyn. She said Mr Corbyn had faced a confidence vote by his own MPs in which four out of five voted against him.

Mr Corbyn defended his speech last week linking the Manchester bombing to Britain’s military interventions abroad, winning support from Mr Robertson and applause from the audience. There was little discussion of Brexit in a debate more focused on issues such as healthcare, pensions and other benefits.

Mr Farron had the best lines of the night and won much of the applause, but never for his party’s policy on Brexit or its demand that the final deal with the EU should be put to a referendum. The participants returned to their core messages in their final statements, with Mr Corbyn promising that Labour would vote “for the many, not the few” and framing the election as a choice over “whether older people get the dignity they deserve or see their incomes fall”.

Ms Rudd said next week’s election was about choosing the strongest leadership to take Britain through Brexit.

“You’ve seen the coalition of chaos in action but in the quiet of the polling booth you have a clear choice – a vote for anyone other than Theresa May is a vote for Corbyn,” she said.

Earlier on Wednesday, a polling projection by YouGov for The Times predicted a hung parliament after June 8th, with the Conservatives losing 20 seats and Labour gaining almost 30. The projection, based on interviews with 50,000 voters over the course of a week, is at odds with other polls this week, which point towards a comfortable Conservative majority.