Ceasefire extended in Yemen in effort to contain coronavirus 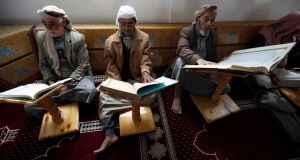 Yemenis read the Koran on the first day of the Muslim holy month of Ramadan at a mosque in Sana’a, Yemen, April 24th. Photograph: Epa/Yahya Arhab

The coronavirus ceasefire proclaimed unilaterally two weeks ago by Saudi Arabia has been extended for a month to support endeavours to contain the pandemic in Yemen.

The extension coincides with the Muslim fasting month of Ramadan, a traditional time of peacemaking. Eager to exit the deadlocked five-year war, the Saudis are seeking to renew United Nations-mediated peace talks.

“The [Saudi-led] coalition’s command reaffirms that there is still an opportunity to focus all efforts in order to achieve a comprehensive and permanent ceasefire,” said Saudi spokesman Col Turki al-Maliki.

The rebel Houthis’ condition centres on an end to the Saudi air and sea blockade of ports and airports in territory they hold. UN Yemen envoy Martin Griffiths is expected to continue shuttling between the sides to promote talks.

In his televised Ramadan address, Saudi-sponsored president Abed Rabbo Mansour Hadi claimed his side has always worked for peace and accused the Houthis of acting under Iran’s direction to scupper UN efforts. The Saudis, their allies and his government have long claimed Tehran has been supplying the Houthis with arms, advice, and funds.

In the belief they are winning the war, the Houthis rejected Riyadh’s original initiative and continued their advance into territory held by the Saudi-backed government. The Saudis retaliated with air raids against Houthi-held areas, generating fears that Yemenis, severely weakened by five years of war, will fall victim to Covid-19.

Prolongation of the conflict could be catastrophic for Yemen where the first coronavirus case was confirmed on April 10th. The International Committee of the Red Cross (ICRC) reports that half of Yemen’s health facilities have been destroyed and that this week, over a 24-hour period, 500 cholera cases had been reported at a hospital in Sana’a, the Houthi-controlled capital.

“Yemenis cope with so much hardship every day,” stated ICRC delegate Franz Rauchenstein.

In addition to devastation inflicted by war, malnutrition and famine, and the looming coronavirus threat, Yemenis have to deal with the rainy season which brings torrential downpours, flooding, cholera, diptheria and dengue fever. The UN has reported that 131,000 Yemenis have died from hunger and disease while 102,000 have been killed by fighting.

With the aim of containing the virus, a group of multinational firms announced that tens of thousands of test kits and medical equipment would be delivered to Yemen next week. Yemen currently has the capacity to test only a few thousand people with kits provided by the World Health Organisation (WHO) .

Having cut $73 million of $85 million from aid programmes for Yemen and shunned the WHO, a senior US official told Reuters, the Trump administration is “preparing substantial” assistance to counter the virus in Yemen but has to find alternatives to deliver it.