WikiLeaks founder Julian Assange has been denied bail by a British judge, who ruled Assange was a flight risk while the United States tries again to secure his extradition. Video: Reuters 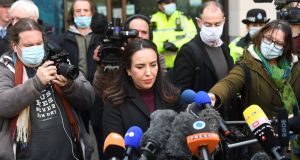 WikiLeaks founder Julian Assange was denied bail on Wednesday by a British judge who said there was a risk he might flee justice while the United States tries again to secure his extradition.

Mr Assange, who has spent more than eight years either holed up in the Ecuadorean embassy in London or in jail, had asked to be freed on bail after the court ruled on Monday that he should not be extradited because he would be at risk of suicide.

“I am satisfied that there are substantial grounds for believing that if Mr Assange is released today he would fail to surrender to court to face the appeal proceedings,” Judge Vanessa Baraitser told London’s Westminster magistrates court.

“As far as Mr Assange is concerned this case has not yet been won ... the outcome of this appeal is not yet known.”

The US Department of Justice says it will continue to seek Mr Assange’s extradition to face 18 criminal charges of breaking an espionage law and conspiring to hack government computers.

Mr Assange’s partner, Stella Moris, said the judge’s decision to deny him bail was a huge disappointment and urged the United States to pardon him. WikiLeaks said it would appeal against the denial of bail.

Admirers hail Australian-born Mr Assange (49) as a hero for exposing what they describe as abuses of power by the United States. But detractors cast him as a dangerous figure who has undermined the security of the West, and dispute that he is a journalist.

WikiLeaks published hundreds of thousands of secret US diplomatic cables that laid bare often critical US appraisals of world leaders, from Russian president Vladimir Putin to members of the Saudi royal family.

Mr Assange made international headlines in early 2010 when WikiLeaks published a classified US military video showing a 2007 attack by Apache helicopters that killed a dozen people in Baghdad, including two Reuters news staff.

Clair Dobbin, a lawyer representing the United States at the hearing, said Mr Assange had gone to extraordinary lengths to avoid extradition and that he could try to leave the United Kingdom to flee justice.

She said that the extradition request had been denied “on a single ground, that of his mental health. It is a decision that hangs on a single thread”. – Reuters