Covid-19: Numbers in North hospitals ‘will rise until mid-January at least’ 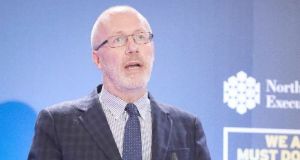 The number of people requiring hospital treatment for Covid-19 is likely to continue to rise until at least mid-January, the North’s chief scientific adviser has warned.

Inpatient numbers in the North would not peak until the last two weeks of this month, Prof Ian Young said.

According to the most recent data, which was updated on Tuesday, 577 people with Covid-19 are being treated in hospitals in the North, with hospital occupancy at 101 per cent. A total of 45 people with coronavirus are in intensive care.

Prof Young appeared before the Stormont Health Committee on Wednesday, and gave an update on what he described as the “dramatic increase” in transmission of the virus in recent weeks.

He said the average number of cases per day had risen to around 1,800, which was associated with a “significant increase” in the percentage of positive tests, which was now over 20 per cent. The reproduction - R - rate of the virus is now close to 1.8.

Prof Young said this “reflects the impact of the two weeks’ relaxation in restrictions which occurred before Christmas, and the intergenerational mixing which occurred at the Christmas period.

“Within the last few days the increase in cases has begun to feed through to increase pressure on our hospitals – the number of admissions is rising as is bed occupancy and the number of patients requiring critical care treatment,” he said.

A strict lockdown was introduced in Northern Ireland on St Stephen’s Day in an attempt to halt the spiralling number of cases, and further measures have come into effect, including the closure of schools and a legally enforceable instruction to stay at home for all but essential purposes.

Prof Young said he hoped the impact of restrictions in place since December 26th would be seen from the end of this week “in terms of a reduction in R and hopefully case numbers beginning to stabilise and fall.

“However, unfortunately it’s likely hospital admissions and numbers of patients requiring hospital treatment will continue to rise and that the inpatient numbers will not peak until sometime in the last two weeks of January,” he said.

Prof Young said any impact of the new, more virulent strain of the virus that has become dominant in the south of England was likely to be “relatively small”, and the expert view was the “current numbers can be explained simply by the increased contact patterns and mixing before Christmas”.

Vaccinations began in Northern Ireland in December, and the first doses of the second type of vaccine available in the North, the OxfordAstraZeneca vaccine, were administered earlier this week.

Prof Young was questioned by committee members about the decision to increase the time between the first and second doses of the vaccine but said he had reviewed the evidence and that bit was in the best interests of the population as a whole.

“I’m content and convinced that the approach which has been taken, or recommended in the UK, is the best approach for the largest number of individuals in the population and will bring the greatest public health benefit.”

Prof Young said the current “best estimate” was that up to 70 per cent of people needed to have been vaccinated before there would be a “substantial impact” on community transmission. He warned “Covid is always going to be with us” and it was likely vaccination would be an “ongoing” process.

“Vaccination against this virus will probably become a routine for most people,” he said.