With the eastern Arab world hollowed out, a return to prewar conditions is impossible 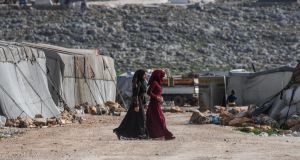 Displaced Syrian women at a camp in Kafr Lusin village on the border with Turkey in Syria’s northwestern province of Idlib. Photograph: Ozan Kose/AFP via Getty

Syrians at home and abroad are marking the ninth anniversary of the war that has killed tens of thousands of compatriots, rendered half the population homeless and devastated the country.

The government has survived overthrow by domestic opponents and proxy warfare by external powers. Damascus now controls 70 per cent of Syria and all major cities, and governs 80 per cent of Syrians still at home.

The war has come at a terrible cost. An estimated 380,000 Syrians, 115,000 of them civilians, have died. Six million have been displaced within the country and five million exiled to neighbouring countries. Losses amount to $400 billion.

Damascus is beholden to allies Russia and Iran, which reinforced Syria’s armed forces in the air and on the ground. If jihadis, rebels and proxy forces had prevailed, Syria would have fractured into fiefdoms dominated by warlords.

Protests erupted in the southern city of Deraa during the Arab Spring in March 2011, when popular uprisings toppled the rulers of Tunisia and Egypt. Several teenage boys were arrested and beaten after scrawling on a wall the seasonal slogan: “The people want the fall of the regime.”

Though soon released, their detention sparked countrywide demonstrations. The initial demand was reform but, after a harsh crackdown by security forces, it became regime change.

External intervention followed. Turkey recruited, trained and armed defected Syrian army officers to fight the government. On August 18th, 2011, the United States and Europe urged Syrian president Bashar al-Assad to resign as he had lost legitimacy. Determined to oust him, Turkey funnelled jihadi fighters into Syria while the US, its western and Arab allies adopted rival rebel and jihadi proxies.

In response, a US-led coalition battled Islamic State by providing air cover for ground forces led by the Kurds in Syria and the Iraqi army and pro-Iranian militias in Iraq. The “caliphate” was erased, its fighters killed, captured and dispersed.

Fighting continues. With Russian and Iranian approval, the government vows to regain all Syrian territory. To achieve this goal, the Syrian army seeks to regain northwestern Idlib province, where al-Qaeda-linked jihadis hold sway, and northeastern Raqqa and Deir al-Zor provinces, where US-sponsored Kurds reign, as well as border areas occupied by Turkey.

Internal instability persists in the south, where former insurgents battle each other and government forces, and in the east where Islamic State fugitives continue to operate.

Refugees abound. More than five million dwell in neighbouring Lebanon, Jordan and Turkey, straining their resources and patience. While Syrians displaced within the country have settled temporarily, many want to return to uninhabitable hometowns and villages.

Reconstruction is denied. Syria remains under punitive US and European sanctions, preventing the country from obtaining funds to rebuild its infrastructure and rescue its depreciating currency and sliding economy.

Return to prewar conditions is impossible for Syrians in Syria. The United Nations estimates that more than 82 per cent live in poverty. The rich prosper but the middle class struggles. Prices of food and fuel rise constantly. Electricity cuts are frequent. Agriculture and manufacturing are slow to recover and business is faltering and failing.

Since Syria has been diminished by war and Iraq destroyed by the US invasion and occupation, the heartland of the eastern Arab world (Mashriq) has been hollowed out. Pan-Arab nationalism has been extinguished and inter-Arab co-operation suspended, weakening the region as a global political actor.

Regional freedom of movement and commerce have been disrupted, destroying the economies of Syria and Iraq and undermining the economies of Lebanon and Jordan, which had formerly depended on trade and transit dues for goods destined for the Gulf and Saudi Arabia.

Tourism has diminished, depriving these countries of essential revenue. Mass protests have erupted in Iraq, Lebanon and, to a lesser extent, Jordan. Unrest and instability escalate.