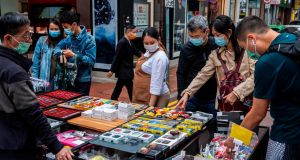 Hong Kong has issued a “red” travel alert urging people to avoid non-essential travel to Ireland, Britain and the US, as the city hunkers down to contain any further outbreak of coronavirus in the global financial hub.

The government also said members of the public were advised to consider delaying all non-essential travel outside Hong Kong.

The global death toll from the outbreak topped 6,000 on Sunday.

Meanwhile, the Philippines recorded four additional deaths from the new coronavirus and 29 new cases, bringing the domestic tally of infections to 140, as authorities placed the entire capital Manila under “community quarantine” for about a month beginning Sunday.

Domestic land, sea and air travel to and from Metro Manila is now restricted, while stringent measures to contain or prevent local transmission have been imposed in other parts of the southeast Asian country.

Major shopping malls in Metro Manila, home to at least 12 million people, have heeded the authorities’ call for a temporary partial closure to discourage people from leaving their homes, while a nighttime curfew will begin on Monday.

Australia has ordered 14 days of self-isolation for international travellers arriving from midnight Sunday and has banned cruise ships arriving from foreign ports for 30 days.

The strict measures, which mirror restrictions in New Zealand, were designed to slow the spread of the global pandemic across Australia and help the country “flatten the peak” of the virus, Mr Morrison told a news conference.

The new border restrictions come as Australia recorded more than 250 cases of coronavirus and three deaths.

The bans mean foreign nationals who have been in any of the four nations will not be allowed into Australia for 14 days from the time they left those countries.

Australia has advised against non-essential gatherings of more than 500 people from Monday, but this is yet to apply to schools and universities.

Neighbouring New Zealand on Saturday said it would require incoming travellers, including its own citizens, to self-isolate for two weeks and banned cruise ships.

Iran’s death toll from the new coronavirus has reached 724, with 113 new deaths in the past 24 hours, an Iranian health official tweeted on Sunday, adding that some 13,938 people have been infected across the country.

Iranian president Hassan Rouhani said on Sunday the government had no plans to quarantine Iranian cities because of the coronavirus outbreak, state TV reported.

The Iraqi government has imposed a curfew in the capital Baghdad as of March 17th until March 24th to prevent coronavirus from spreading, the state news agency said on Sunday. At least 110 cases have been confirmed so far in Iraq, and 10 people have died.

The total number of infections in the six Gulf Arab states now stands at 872, with no deaths reported so far.

Kuwait and Saudi Arabia have already taken the most drastic steps among Gulf Arab states by halting international passenger flights.

Several African countries on Sunday closed borders, cancelled flights and imposed strict entry and quarantine requirements to contain the spread of the new coronavirus, which has a foothold in 26 nations on the continent as cases keep rising.

South African president Cyril Ramaphosa declared a national state of disaster on Sunday as he announced a range of measures to combat coronavirus, which has so far infected 61 people in South Africa and showed the first signs of internal transmission there.

Measures to be taken include travel bans to countries such as Italy, Germany, China and the US. The government will also prohibit gatherings of more than 100 people and cancel large events and celebrations, the president said.

Kenyan president Uhuru Kenyatta told his nation in a televised address: “The government is suspending travel for all persons coming into Kenya from any country with reported coronavirus cases . . . only Kenyan citizens, and any foreigners with valid residence permits, will be allowed to come in provided they proceed on self-quarantine.”

Anyone who entered Kenya in the last 14 days should self-quarantine, he said. The ban would take effect within 48 hours and remain in place for at least 30 days, he said. Schools should close immediately and universities by the end of the week, he added.

In west Africa, Ghana will from Tuesday ban entry to anyone who has been to a country with more than 200 cases in the last 14 days, unless they are an official resident or a Ghanaian national.

In southern Africa, Namibia ordered schools to close for a month following two confirmed cases of coronavirus announced on Saturday.

Kenya and Ethiopia have now recorded three and four cases respectively, authorities in each nation said on Sunday, two days after they both reported their first case.

Djibouti, which has no confirmed case of Covid-19, announced on Sunday it is suspending all international flights. Tanzania, which also has no cases yet, cancelled flights to India and suspended school games.

The Dominican Republic will from Monday morning suspend all flights from Europe and the arrival of all cruise ships for a month in order to prevent the spread of coronavirus, the government said late on Saturday.

Haiti is considering closing its airports and ports to travellers as well as the border with the neighboring Dominican Republic in order to prevent the entry of the coronavirus, prime minister Joseph Jouthe said on Twitter on Sunday. – Reuters and agencies