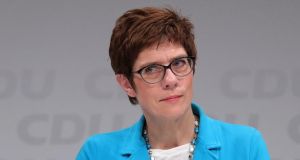 Annegret Kramp-Karrenbauer is many things: a political science graduate, a former minister and state premier, a wife and mother of three sons. What she is not is anyone’s “Mädchen”.

Almost 30 years ago, Helmut Kohl plucked a young woman from obscurity and promoted her – with paternalistic, sexist condescension – as his “Mädchen”. Angela Merkel hid her mortification well and, in time, had her revenge: using a fundraising scandal to humiliate her one-time mentor and snatch from his chosen heir the leadership of the Christian Democratic Union (CDU).

At the 2000 party conference, 897 of 935 delegates made her the CDU’s seventh leader, and first woman in the position. On Friday she passes on the torch again in a close race that is a choice between continuity or change.

The continuity candidate is Annegret Kramp-Karrenbauer, known to all as AKK, given her mouthful of a name. She is leading in polls, with backing from 48 per cent of CDU supporters. However, it is not voters but 1,001 regional party delegates who will choose the new leader. And she faces a strong rival in Friedrich Merz, the party’s 63-year-old prodigal son, returned after self-imposed political exile to claim the top job.

With a rhetorical gift, a mercurial air and a Machiavellian reputation, the 6ft 4in liberal lawyer has towered over the tiny Kramp-Karrenbauer, literally and figuratively, in a series of regional conferences. On Tuesday evening news leaked that he has secured the backing of Wolfgang Schäuble. The CDU’s influential grand old man called Merz the “best for the country ... a decent guy with a clear compass”.

But male competition has never fazed Kramp-Karrenbauer before. Born into a conservative Catholic family in 1962 in tiny southwest Saarland, Annegret Kramp, as she was then, entered politics in 1984 when she won a council seat in her native Püttlingen – population 20,000 – 30 minutes’ drive from the French border. She battled her way up past conservative, older men: CDU grandees, party colleagues, even the police chiefs and state prosecutors who were dismissive when she became state interior minister in 2000.

AKK is a sharp political mind with a knack for political polemic, if it serves a political end – all with an unselfconscious regional German accent

Political journalists rush to compare her to Merkel, distracted by their shared gender, no-nonsense sobre style and preference to forgo winner-takes-all ego politics for political compromise where everyone looks good.

And yet AKK, at her best, recalls Helmut Kohl: a sharp political mind with a knack for political polemic, if it serves a political end – all wrapped up in an inconspicuous package and sold with an unselfconscious regional German accent.

In her harmless Saar singsong, AKK has defended the Merkel refugee crisis response of 2015-16, which saw more than one million enter Germany.

At the same time, without being denounced as a populist hard-liner, she promised regional delegates that criminal asylum seekers should be deported at speed and “never allowed set foot again on European soil” – even if they come from war-torn Syria.

Similarly, though pitching herself as the centrist continuity candidate, her pitch to CDU conservatives is obvious: in the final regional conference in Berlin, she argued that “an abortion is not a gallbladder” operation and stands by a 2015 remark mentioning same-sex marriage in the same breath as paedophila and polygamy.

Like Merkel, Kramp-Karrenbauer owes her rise to hard work, being underestimated and a love of calculated risk.

In January 2012, a year after taking over as Saar state premier, she swapped coalition partners in office, then called – and won – a snap election. Merkel was infuriated by the regional leader’s risk-taking but impressed by the results and, last February, lured her to Berlin as CDU secretary general.

Neither woman mentioned the obvious gravitas of the decision, confidantes say: becoming secretary general – as Merkel did before her – is AKK’s best chance to lead the CDU and even the country.

Hopes to build her profile and power base slowly were shot to pieces by Merkel’s departure announcement yet, within 48 hours, AKK had her leadership pitch ready: the same but different.

She cannot credibly distance herself from the woman who promoted her; instead she promises to match the ego-free leadership style with a more dynamic political style

She cannot credibly distance herself entirely from the woman who promoted her; instead she promises to match a similar conciliatory, ego-free leadership style with a more dynamic political style.

Kramp-Karrenbauer argues the time has come to end the “leaden” Merkel era of sitting out decisions or, even worse, imposing “without alternative” decisions from above.

As well as heeding grassroots more, she wants to revive energetic debate among the various CDU wings and, with it, the party’s traditional breadth as a catch-all, centre-right Volkspartei.

That, she argues, is the best hope to win back voters lost to the far-right Alternative für Deutschland.

Kristina Dunz, author of the first AKK biography, says the politician is a value conservative with a left-wing social-policy heart, whose differences from Merkel are more interesting than the similarities.

“She doesn’t wobble in her positions, even when criticised. She bets on one horse,” said Dunz. “She is more emotional...and not as slow and deliberate as Merkel. She is also more belligerent.”

Beyond reshaping the party and managing an unprecedented power-share with Merkel, who plans to stay on as chancellor until 2021, the new CDU leader has to revive a grand coalition lumbering under its own leaden reputation.

But unlike her revivals, AKK has 18 years of uninterrupted government experience under her belt.

And supporters expect her to ram that point home on Friday, as she did in a fiery speech last February, containing a spontaneous aside that has since become her political motto: “I can, I want and I will.”