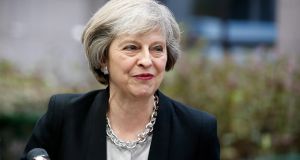 Theresa May has promised to invoke article 50 by the end of March. Photograph: Julien Warnand/EPA

Twenty-seven EU leaders met in Brussels without Britain late on Thursday night to work out arrangements for negotiating Brexit next year after Theresa May triggers article 50 of the Lisbon Treaty.

The dinner discussion of Brexit was overshadowed by a dispute over the role the European Parliament will play in article 50 negotiations, with the parliament’s president Martin Schultz threatening the “hardest possible Brexit” if MEPs do not have a big enough role.

The European Commission will conduct the negotiations on behalf of the EU, based on a mandate agreed by EU leaders. Leaders of the 27 remaining member states were on Thursday night considering a draft text outlining how the negotiations would be organised.

A representative from the member state holding the EU’s rotating presidency would form part of the negotiating team, and representatives of the European Council president Donald Tusk, would be present at all negotiating sessions, along with commission representatives. EU ambassadors would help ensure that the negotiations remain consistent with the mandate agreed by EU leaders.

The European Parliament would be kept “closely and regularly informed” on the progress of the negotiations and would take part in “an exchange of views” before each meeting of the General Affairs Council, but the parliament would not have a seat at the negotiating table.

Under article 50, the European Parliament, along with the European Council, will have to approve any final Brexit deal.

“If we are not adequately involved, we may not be able to give our consent,” Mr Schulz told EU leaders at the start of Thursday’s summit. “And in this situation, the UK would face the hardest Brexit possible. It is absolutely unacceptable for us.”

Although no formal Brexit negotiations will begin until Ms May invokes article 50, which she has promised to do before the end of March, EU member states are expected to start co-ordinating a common approach to the talks early in the new year. Under article 50, the EU and Britain will spend up to two years an agreement, setting out the arrangements for Britain’s withdrawal, “taking account of the framework for its future relationship with the union”.

EU officials expect the final deal to outline the shape of Britain’s future relationship with the EU, including issues such as a possible trade deal. A trade deal could take a number of years to negotiate, during which Britain and the EU could agree to operate transitional arrangements.

The terms of such arrangements are likely to prove controversial in Britain, particularly if they oblige the UK to continue to accept free movement of people, to pay into the EU budget and to respect rulings of the European Court of Justice for a number of years after Brexit.

Arriving in Brussels on Thursday, Ms May said she was pleased the other 27 leaders were planning for Brexit talks.

“I welcome the fact that the other leaders will be meeting to discuss Brexit tonight as we are going to invoke Article 50, trigger the negotiations by the end of March next year. It’s right that the other leaders prepare for those negotiations as we have been preparing. We will be leaving the EU. We want that to be a smooth and orderly a process as possible. It’s not only in our interests but in the interests of the rest of Europe as well,” she told reporters.

The prime minister did not respond to questions about a report by Britain’s ambassador to the EU, Ivan Rogers, suggesting that it could take up to a decade for Britain to negotiate a new trade deal with the EU after Brexit.