Air strikes on Syria will not end Assad’s brutal tactics

Vincent Durac: It’s expected this US-led attack will be of much longer duration than last year’s 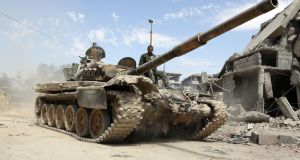 Syrian army soldiers advancing in an area on the eastern outskirts of Douma. Photograph: Stringer/AFP/Getty Images

The alleged use of chemical weapons by the Assad regime against civilians in Douma last weekend has now brought about a US-led military response.

Donald Trump warned that Syria would pay a “big price” for the chemical attack echoed earlier warnings from the US administration.

In February, the US defence secretary, James Mattis, warned Syria of “dire consequences” if president Bashar al-Assad used chemical weapons. He made clear that he did not believe the Syrian regime had destroyed its stockpile of chemical weapons as promised under the 2013 deal brokered by Russia during the previous US administration.

The US is supported by the UK and by France, whose president Emmanuel Macron stated in March of this year that his country was prepared to launch “targeted air strikes” against any site in Syria used to deploy chemical weapons with civilian casualties.

There is an expectation that this US-led attack will be substantially greater than that undertaken in April of last year, when, in response to a Syrian chemical attack at Khan Shaykhoun in northern Syria, 59 cruise missiles were launched in an attack on an airbase controlled by Assad’s regime. Despite this, the airbase was operational again within 24 hours.

This attack on Syria’s military capacity is expected to be of longer duration and to involve multiple targets in order to inflict more serious damage and send a stronger message to the Syrian regime.

However, the situation is greatly complicated, to say the least, by the position of Russia, which rejects the allegation that the Syrian regime used chemical weapons in Douma. Its ambassador to Lebanon was reported earlier in the week as having told Hizbullah’s Al-Manar television station that Russia would not only shoot down any missiles directed at Syria but also “the sources from which the missiles were fired”. Thus, the attack could quickly lead to an escalation in the level of conflict in Syria.

Furthermore, it is worth noting that air strikes carry with them the potential for civilian casualties. Data released earlier this year by the Combined Joint Task Force for Operation Inherent Resolve (the US-led coalition established to co-ordinate efforts against Islamic State in Syria and Iraq) suggested that 831 civilians had died in the course of air strikes. This is a significant rise from the official figure of 168 at the time that Trump assumed the presidency.

Others suggest much higher figures. Airwars, a journalist-led effort to monitor civilian casualties from air strikes in Syria and Iraq, claim that more than 6,000 civilians have died.

But beyond this attack lies the question of the longer-term nature of US policy on Syria. This too remains unclear.

In a speech at Stanford University in January of this year, then secretary of state, Rex Tillerson, outlined an expansive and open-ended role for the US in Syria.

The US, he said, desired five “end-points” for Syria: the enduring defeat of Islamic State, also known as Isis, and al-Qaeda so as to ensure no possibility of their re-emergence; the resolution of the conflict through a UN-led political process that would lead to a stable, unified and independent Syria under a post-Assad leadership; the reduction of Iranian influence in the country such that Syria’s neighbours are “secure from all threats emanating from Syria”; the creation of conditions for the return of refugees and internally displaced persons; and, finally, a Syria free of weapons of mass destruction.

Tillerson’s speech was welcomed by some as sensible but was quickly criticised for his failure to articulate any clear strategy to achieve these objectives. In any case, it was quickly rendered a dead-letter with his dismissal on March 13th.

By the end of March, Trump was telling an audience of supporters in Ohio that the US would be leaving Syria “very soon”, just hours after the chief spokesperson for the Pentagon had told reporters that important work remained to be done to guarantee the lasting defeat of violent extremists in Syria.

On April 4th, the White House announced that the US military mission to Iraq – some 2,000 troops – was coming to an end, although no timetable was set for withdrawal. The White House has, reportedly, stepped back from talk of imminent withdrawal and, according to sources, Trump has given the department of defence six months to complete its mission in Syria, before a withdrawal of US forces takes place. Quite what will happen after that remains unclear.

The incoherence of US policy towards Syria is in no way diminished when the views of those now advising Trump are taken into account. John Bolton, the new national security adviser to the president, told Fox News in February that Syria, “sadly tragic” as it might be, is a “sideshow” in terms of the bigger strategic position in the Middle East.

For Bolton, regime change in Tehran is a higher priority than dealing with the complex challenges that the Syrian conflict represents.

By contrast, Trump’s nominee for the now vacant position of secretary of state, Mike Pompeo, has criticised the Russian and Iranian presence in Syria as well as Russian efforts “to undermine western democracy” and is regarded by some as likely to push for a more assertive US posture on Syria.

How all of this squares with a president who campaigned on the basis that the US should stay out of Syria and repeatedly tweeted to that effect, remains to be seen.

The key difficulty facing the Trump administration is that if it is really serious about making Assad’s regime pay a “big price” for the attack on Douma, it is necessary to undertake a much more sustained campaign against regime assets over a much longer period of time than is currently likely.

Such a course of action would be fraught with risks of an escalation of conflict with Russia and Iran, and would entail a commitment to a level of intervention in Syria that is the antithesis of almost everything that Trump has said in relation to the conflict to date. Furthermore, it would carry no guarantee of a successful outcome.

Parallel Russian-sponsored “peace talks” took place in Sochi over two days in January of this year and were attended by representatives of the Syrian, Iranian and Turkish governments as well as the UN’s envoy. However, they were boycotted by the main Syrian opposition bloc.

As for Assad, buoyed by the unwavering support of Russia and Iran, and the apparent success of his brutal tactics to date, he will remain convinced of the security of his position and see very little reason to alter the course of his strategy.