Russia warns UK against any ‘secret resettlement’ of Skripals 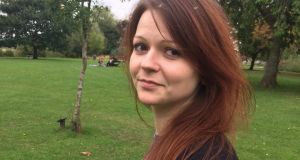 Russia has warned Britain that it will view as abduction any move to resettle former spy Sergei Skripal and his daughter Yulia, who are recovering from a poison attack in Salisbury last month. Ms Skripal (33) left hospital on Monday and has been taken to a “secure location” and her father is reported to be recovering rapidly despite initial fears that he would not survive the poisoning.

The Russian embassy in London, which has been seeking consular access to the Skripals, warned on Tuesday against any attempt to relocate them with new identities.

“Secret resettlement of Mr and Ms Skripal, barred from any contact with their family will be seen as an abduction or at least as their forced isolation,” the embassy said.

The British government has blamed Russia for the attack on the Skripals with a military grade chemical agent and a number of countries, including Ireland, have expelled Russian diplomats in response to it. Moscow has denied any role in the incident and accused Britain of staging an elaborate cover-up of what really happened in Salisbury.

Britain’s chemical weapons laboratory at Porton Down admitted last week that it has been unable to prove the Novichok chemical agent used in the attack was manufactured in Russia.

Christine Blanshard, medical director of Salisbury District Hospital, said on Tuesday that Ms Skripal’s discharge from hospital did not mean she had fully recovered.

“This is not the end of her treatment but marks a significant milestone. Her father has also made good progress. On Friday I announced he was no longer in a critical condition. Although he is recovering more slowly than Yulia, we hope that he too will be able to leave hospital in due course,” she said.

Dr Blanshard said that both patients had responded well to treatment over the past month, which involved advice from experts in nerve agents around the world.

“Nerve agents work by attaching themselves to the particular enzymes in the body, which then stop the nerves from functioning. This results in symptoms such as sickness and hallucinations. Our job in treating the patients is to stabilise them, ensuring that they can breathe and blood can continue to circulate,” she said.

“We then need to use a variety of different drugs to support the patients until they could create more enzymes to replace those affected by the poisoning. We also use specialised decontamination techniques to remove any residual toxins. Both patients have been responding exceptionally well to the treatment we’ve been providing, but equally both patients are at different stages of their recovery.”

The Russian embassy on Tuesday congratulated Ms Skripal on her recovery but demanded “urgent proof that what is being done to her is done on her own free will”.

The embassy went on to suggest that the deaths of two guinea pigs and a cat Mr Skripal kept were part of a wider British attempt to destroy evidence about the attack.

“Skripal pets starved to death and corpses burnt, bench where the victims were found removed, plans about pulling down their home and even restaurants visited. UK is destroying important and valuable evidence,” it said.