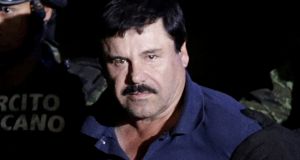 The US has thrown huge resources into the two-month-old trial of Mexican drug lord Joaquín “El Chapo” Guzmán, and lurid testimony in the Brooklyn courtroom has told of cold-blooded skulduggery, lavish narco lifestyles and webs of corruption that span the Americas.

Only it was not a bombshell at all. In Mexico it barely made the front pages. Nor did it kick up a social media storm, except for a rebuttal by Peña Nieto’s former spokesman, who tweeted: “It was @EPN’s government that found, arrested and extradited Joaquin Guzmán.”

Instead, in the country that is the setting for Netflix’s latest Narcos drama series, the news was noted, briefly discussed and mostly dismissed. In part that is because of the low credibility of a convicted drug lord, and Mexicans are anyway inured to stories of high-level corruption.

Instead, they are more concerned by a nationwide gasoline shortage and President Andrés Manuel López Obrador’s plans for a military-led national guard to quell violence that has claimed 250,000 lives since 2006.

But in larger part it is because the focus of the trial is not a truth-and-reconciliation accounting of Guzmán’s life of crime but rather a full-bore effort by US prosecutors to send the “Osama bin Laden of cocaine” to jail.

“Have Mexicans been bribed? Are the police corrupt? Is the military involved in drugs? Are politicians? Sure. None of that comes as a surprise,” said Alejandro Hope, a security consultant and former Mexican intelligence agent.

“This trial is not about seeking justice for what Chapo did in Mexico, the people he paid, the people killed. It’s about rendering punishment in the US for crimes he did there.”

Many believe the 61-year-old former head of the Sinaloa cartel is the most successful drug trafficker in history, “except perhaps for Du Yuesheng, the Shanghai mobster who died in 1951”, said Vanda Felbab-Brown, an expert on organised crime at the Brookings Institution.

Extradited to the US in 2017 after twice escaping Mexican jails, most recently via a well-lit mile-long tunnel, Guzmán faces a 17-count indictment that accuses him of building a multibillion-dollar narcotics empire over three decades. He has pleaded not guilty.

The defence team, led by the former lawyer of Mafia mobster John “Junior” Gotti, has sought to portray him as the victim of a vast conspiracy of rivals that includes US drug agents and his own right-hand man, who survived by bribing the “entire” Mexican government.

Presiding judges have largely blocked this strategy, arguing it distracts from the main task of trying Guzmán. Attempts to introduce evidence about corrupt US agents, or questions about Operation Fast and Furious, in which US officials lost track of hundreds of weapons while investigating gun-smuggling networks, have also been shut down.

Instead, incidental glamour has often caught public attention. That has included witnesses’ reference to Hollywood star Sean Penn’s fateful, critics say self-seeking, 2016 interview with Guzmán at his mountain base in northwestern Mexico, which may have led to his final capture.

There has also been Guzmán’s wife, beauty queen Emma Coronel Aispuro, who typically appears in the high-security courtroom dressed to the nines in stiletto heels and says in interviews she never saw her four times-married husband do anything illegal.

Guillermo Valdés, a former Mexico intelligence chief, said the trial was bringing “only disrepute” to Mexico. Apart from the moral need to bring Guzmán to justice, other analysts agreed the trial would do little to change drug-smuggling.

Nor would President Donald Trump’s mooted $6 billion border wall, given that most drugs enter legal points of US entry, as corroborated in Guzmán’s trial and by US Customs and Border Protection data.

“There are 30 million drug consumers in the US,” Valdés said. “It’s utopian to think you end drug trafficking in Mexico.”

Guzmán’s final arrest, after five years on the run and flagging fortunes, marked an apex in the so-called king pin strategy that targets mob bosses but has done little to reduce crime or violence. This is a problem that López Obrador’s new military-led national guard hopes to address, although critics are doubtful.

For one, other bosses soon take the king pin’s place. Cartels often fragment, leading to greater violence as smaller groups jockey for position. They also diversify into businesses such as extortion, people smuggling, contraband avocados and more than $3 billion of gasoline theft annually.

Mexico, dogged by weak state enforcement, is at the poorer end of the drug smuggling chain: of the estimated annual $40 billion business, the majority of profits are in the US. As the telecoms tycoon Carlos Slim once told the Financial Times: “It is unfair that the drug producing countries get to keep all of the problems, and the consumer nations all the profits.” – Copyright The Financial Times Limited 2019