Critics of Orban and new ‘slave law’ rally across Hungary 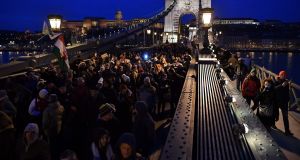 Demonstrators march on the Chain Bridge during a protest against the recent amendments to the labour code, dubbed “slave law” by opposition forces, in Budapest, Hungary, on Saturday. Photograph: Marton Monus/EPA

Thousands of Hungarians have protested in Budapest and other cities against their government’s introduction of a “slave law” on overtime and its alleged attack on democracy and the rule of law.

The rallies on Saturday were the latest to unite a broad spectrum of political parties, trade unions, civil society groups and students who want to break nationalist prime minister Viktor Orban’s stranglehold on power.

About 2,000 people gathered in central Budapest, while smaller protests including temporary road blockades took place in other towns and cities.

The demonstrations began last month, when the government passed a law that allows Hungarian firms to demand 400 hours of annual overtime from workers and gives them three years to make payment for it. That prompted union leaders to join forces with politicians and activists who want Mr Orban to guarantee the independence of Hungary’s beleaguered law courts and public media, and to allow the country to join the EU prosecutor’s office to allow outside scrutiny of state corruption.

Those complaints chime with international criticism of Hungary’s government, which is being sued by the European Union for its hardline policies on immigration and NGOs, and over education reform that has forced the liberal Central European University to move most of its courses from Budapest to Vienna.

Unions have threatened to hold a national strike unless Mr Orban scraps the “slave law” and provides higher pay, more workers’ rights and a better pension system; on Friday about 4,000 employees at an Audi factory in western Hungary held a two-hour “warning strike” over low wages.

The broadly popular government insists the overtime reform is fair, however, and allows willing workers to earn more money and benefit from a labour shortage in Hungary, which is exacerbated by Mr Orban’s anti-immigration policy.

His allies also claim, without offering evidence, that the protests are backed by billionaire George Soros, the liberal philanthropist whom Mr Orban accuses of being behind mass migration to Europe and EU criticism of the government.

Protesters marched through Budapest carrying a banner saying “We have had enough” and then listened to speeches and songs in the shadow of Buda castle.

“We want to be teachers and have children, and for us it would be very important to have some more money and a brighter future than we can have in the current conditions with this government,” said Renata (24), a student protesting with her husband, Zsolt (25).

They declined to give their surnames, citing problems that they said some teachers had encountered at work after backing the protests.

“My main problem was when the government started fighting against George Soros,” Zsolt added.

“Personally, I don’t care about George Soros ... but I hate that some people believe that Soros is the only reason for our problems.”

Virag Kegl (18), another student protester in Budapest, said: “When I heard about the ‘slave law’ I was pretty outraged, and afterwards I read about how the independent court system is being changed. I thought: ‘Is this democracy?’ I don’t think this is how European countries should work.”