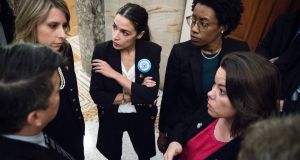 After I’d been writing a column for a few years, a male boss gave me a T-shirt depicting the Furies swooping.

He didn’t mean it as a compliment.

The three sisters, the “infernal goddesses” of ancient mythology born from the blood shed by Uranus when he was castrated by his son, were known for relentlessly hounding men. But the Furies took vengeance on wicked men who hurt women and swore false oaths.

So I took it as a compliment.

The capital has suddenly been infused with the spirit of the Furies. After many false springs and discouraging backlashes, we are finally experiencing a revolutionary assertion of women’s power that is transforming Congress.

Kill Bill-style, the fiery Democratic women keep coming, driven by vengeance against the wicked man in the White House with the history of hurting women and swearing false oaths.

Swooping toward 2020, the moment of truth for Donald Trump that is also aptly the centennial of women’s suffrage, the women are gathering force at a giddy speed.

This was not a good week to be a dude in politics.

Alexandria Ocasio-Cortez and her girl squad – fellow freshmen lawmakers Katie Hill of California, Lauren Underwood of Illinois and Jahana Hayes of Connecticut – tracked Mitch McConnell to petition him to have a vote to reopen the government. The Senate majority leader has been trying to lie doggo as Trump thrashes after pulling the rug out from under him.

It was another jangly AOC media stunt that irritated some of her colleagues but fired up the meme factory. She broadcast the scavenger hunt on Instagram with the hashtag Where’s Mitch?

When AOC tweeted that a Getty photo of the women storming the halls of Congress looked like a Spice Girls album cover, Hill tweeted back her own remix of the Britpop girl-power anthem Wannabe: “I’ll tell you what I want . . . What I really really want . . . 800,000 government employees to be able to pay their bills.”

AOC picked it up, tweeting another verse: “Now don’t go wasting our precious time/If they get their act together we could be just fine.”

The day before, at a nearby hotel, Bernie Sanders sneaked in through an employee entrance to listen in agonising detail to women who had worked for him in 2016, as they levelled charges – under the watchful eyes of three female facilitators – about sexism, harassment and sexual violence on his campaign. The disgusted women, fed up with Sanders’s deflections, made it clear that if he didn’t take their stories seriously, he might be sitting out 2020, an election cycle that will be shaped by the #MeToo movement.

As Kirsten Gillibrand, Elizabeth Warren and Kamala Harris dominated 2020 talk, Beto O’Rourke tried to get out of his “funk” and reclaim his mojo as the Democrats’ main crush.

But his southern border road trip and Livejournal stylings – not to mention his Instagramming of his teeth cleaning – were widely mocked as a lame odyssey of self-discovery. When asked by Washington Post reporter Jenna Johnson what we should do about immigration, O’Rourke, who represented a Texas district on the border for six years, rambled.

CNN’s Nia-Malika Henderson pointed out that a woman, a parent of three – could “never, ever” get away with such a “navel-gazing, self-involved rollout” – much less “a road trip adventure to clear her head”.

After three weeks of Nancy Pelosi out-trolling Trump on the government shutdown, polls showed an erosion of his base. “We are getting crushed!” Trump told his acting chief of staff, Mick Mulvaney, according to the Times.

Pelosi offered the perfect sly riposte: “I don’t think the president would be that petty, do you?”

With her taunt that the president could make his state of the union address in his own office, Pelosi continued the strategy of denying the attention addict attention. With his cancellation of her trip to Afghanistan, Trump simply underscored that Pelosi has been to our war zones many times while Trump has only been to Iraq once after being shamed into it.

Asked if Trump was retaliating after her threat to cancel the address, Pelosi offered the perfect sly riposte: “I don’t think the president would be that petty, do you?”

With Pelosi and the legislative Spice Girls providing the contrast, with the ranks of House women depleted in the GOP and with Steve King getting his comeuppance for racist comments, the Republicans look more than ever like a 1950s mahogany-panelled, smoke-filled, bourbon-and-branch-water party.

Suburban Republican women, who turned on Trump in the midterms, won’t be lured back by the news that thousands more migrant children had been separated from parents at the southern border and by images of the president beaming in to the annual march against a woman’s right to choose at the National Mall Friday. The vice-president and his wife were on stage at the mall, and Karen Pence started a new job teaching art at a Virginia Christian school that is intolerant of LGBT students and LGBT parents.

Trump had no clue about how much harder his life would be with divided government. But his greatest shock will be that his election woke up the wrath of the Furies, who are unceasing until they get their man. – New York Times