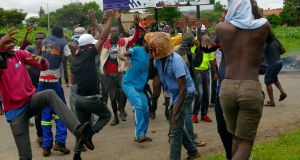 Protesters gather during a demonstration over the hike in fuel prices in Harare, Zimbabwe, on Tuesday. Photograph: Tsvangirayi Mukwazhi/AP

Zimbabwe’s government was accused of cutting off access to the internet on Tuesday after violent protests 24 hours earlier sparked by spiralling fuel prices and cash shortages left at least five people dead and dozens more injured.

According to local media reports the government ordered the Postal and Telecommunications Regulatory Authority of Zimbabwe to cut internet access to prevent citizens from using social media to organise protests similar to those that erupted on Monday.

A search of Twitter traffic showed there were no tweets coming from active accounts in Zimbabwe on Tuesday afternoon despite the crisis unfolding in the country.

Unions in the southern African country launched a nationwide three-day strike at the start of the week over President Emmerson Mnangagwa’s decision to raise the cost of diesel from $1.36 (€1.19) a litre to $3.11, and petrol from $1.24 a litre to $3.31.

On Saturday Mr Mnangagwa said the price of petrol and diesel would more than double to tackle a fuel shortfall in the country caused by increased usage, which was being compounded by illegal currency and fuel trading.

However, political analysts say the violent protests can also be attributed to citizens’ pent-up anger over the government’s inability to tackle Zimbabwe’s worsening economic situation, after securing power last August on the back of promises to rebuild the shattered economy.

Since Mr Mnangagwa has taken office basic commodities and public transport costs have skyrocketed and the salaries of Zimbabweans have not increased at the same rate.

In addition, there is a chronic shortage of US dollars – the currency Zimbabwe adopted after abandoning its own in 2009 due to hyperinflation – leaving many people with little or no access to cash.

There is also very little confidence in the bond notes the government introduced in a bid to ease the cash crisis. They are supposed to be worth the same as their US dollar equivalent, but on the black market they are valued at far below the US currency.

On Monday protesters in high-density areas blocked roads, burned cars and buses, and looted shops, while the opposition Movement for Democratic Change’s (MDC) Harare headquarters was subjected to an arson attack.

According to the Zimbabwe Association of Doctors for Human Rights, five people were killed and at least 26 were injured during clashes that took place between protesters and security forces in the capital Harare, and the cities of Bulawayo and Mutare. Many of those injured had suffered gunshot wounds.

Security minister Owen Ncube confirmed there had been deaths but did not have information on how many. The government also confirmed that more than 200 people had been arrested during Monday’s protests and blamed the MDC and anti-government forces for organising the violence.

The situation appeared to be much quieter on Tuesday, as many people stayed at home and businesses, schools and the stock market remained shut. However, there was a heavy army presence on city streets and tensions remained high in some urban areas.

The outbreak of violence could not have come at a worse time for Mr Mnangagwa, who is in Moscow as part of a five-country tour he is undertaking this week to attract investment into the Zimbabwean economy.