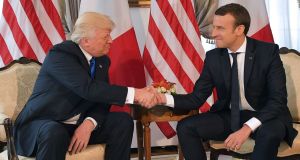 US president Donald Trump and French president Emmanuel Macron: “It’s not about friendship or being buddies . . . Macron thinks he can say things to Trump, on climate change, on the Iran nuclear deal, that no one else can.” File photograph: Mandel Ngan/AFP/Getty Images

French president Emmanuel Macron will revisit the theme of the necessity for liberal democrats to confront authoritarian populism in an address to a joint session of the US Congress on April 25th, eight days after he made the same argument before the EU parliament.

The speech about democratic values could be sensitive, given that Macron will be the guest of the right-wing populist president Donald Trump, speaking before a Congress dominated by Republicans.

In the Oval Office on Tuesday, the French and US leaders will also discuss the looming May 12th deadline for the US to pull out of the 2015 nuclear accord with Iran. Trump set the deadline unilaterally in January.

Macron may have helped instigate the open letter addressed by 500 European parliamentarians from France, Germany and the UK to their counterparts in the US Congress. Four European and US newspapers published the text on Friday. It calls on US legislators to block any attempt by Trump to withdraw from the Iran accord. Macron’s party, La République en Marche, announced its publication in advance.

Macron’s interview with Chris Wallace of Fox News, to be broadcast on Sunday on the eve of his arrival in the US, is the French president’s way of speaking to Trump voters, the Élysée said. Macron has also sought to circumvent Trump by engaging with US civil society and the business community on climate change.

France shares Trump’s concerns about Iran’s ballistic missile research and Iranian military influence in Iraq, Syria and Lebanon. But Macron believes it is essential to preserve the accord, which halted the Iranian nuclear programme.

French officials do not expect the Iranian issue to be resolved during the state visit. Officials from France, Germany and the UK are drawing up a document that would constitute “an accord within the accord” between the US and Europe, in the hope of persuading Trump not to permanently withdraw from the agreement.

Trump and Macron are both outsiders who defied expectations to win their countries’ highest office. At their first meeting, in Brussels last May, they engaged in an alpha male arm-wrestle handshake that was interpreted as evidence of the young leader’s willingness to stand up to Trump.

Their rapport was strengthened when Donald and Melania Trump travelled to Paris last Bastille Day at Macron’s invitation. As a result of that visit, Trump ordered a 4th of July military parade similar to France’s, and reserved the first state visit of his term for the Macrons.

The Trumps and Macrons will dine together on Monday night at Mount Vernon, the home of George Washington, where the French general Lafayette visited America’s first president in revolutionary times. The first couples will sit together at the state dinner on Tuesday night. Trump says his wife Melania is eager to see Brigitte Macron again.

Trump at one point said he might re-join the Paris climate accord because he likes Macron. He hasn’t followed up

“I think Macron tells himself, ‘Everyone is against Trump. So I’ll try a personal relationship,’” says the former French foreign minister Hubert Védrine. “It’s not about friendship or being buddies. That doesn’t exist between heads of state . . . Macron thinks he can say things to Trump, on climate change, on the Iran nuclear deal, that no one else can. You might say it hasn’t worked so far. But keeping a distance or criticising Trump hasn’t worked either. It’s a gamble.”

“I don’t think friendship is a consideration,” the adviser said. “There’s a personal dimension which makes it possible to establish a relationship based on confidence and respect. But friendship is something private and intimate.”

Trump at one point said he might re-join the Paris climate accord because he likes Macron. He hasn’t followed up.

On April 15th, Macron claimed he had convinced Trump to keep some 2,000 US troops in the Rojava region of northern Syria, where the French military are also present. Within hours, the White House said Trump had not changed his mind about withdrawing US forces. It is possible that Trump, who is known for inconsistency, made the promise in private conversation but then denied it.