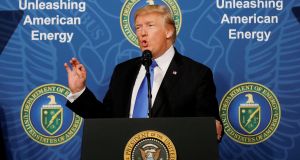 President Donald Trump has said repeatedly there was no collusion between his campaign and Russia. File Photograph: Reuters

The Democratic Party sued Russia, Donald Trump’s campaign and WikiLeaks on Friday, alleging they conspired to disrupt the 2016 US presidential election.

The party alleges in a federal lawsuit in Manhattan that top Trump campaign officials conspired with the Russian government and its military spy agency to hurt Democratic presidential nominee Hillary Clinton and tilt the election to Mr Trump by hacking Democratic Party computers.

The lawsuit alleges that Mr Trump’s campaign “gleefully welcomed Russia’s help” in the 2016 election and accuses his campaign of being a “racketeering enterprise.”

Four US intelligence agencies reported last year that Russia sponsored the hacking of Democratic Party groups and other actions during the 2016 campaign.

Part of the effort was to benefit Mr Trump over Ms Clinton, the agencies said.

The Democratic National Committee blames Russia for breaches of its computer systems in 2015 and the first half of 2016.

Hackers disseminated internal communications of party officials as the Democratic nominating convention got under way, and WikiLeaks released thousands of emails, some of which were embarrassing for the Clinton campaign.

Most of the accusations appeared to be based on news reports and publicly available legal documents and offered little new information about alleged collusion with Moscow.

The White House did not immediately respond to requests for comment.

Mr Trump has repeatedly denied his campaign colluded with Russia. Russia has denied meddling in the election.

Mr Stone said the lawsuit was based on “a left-wing” conspiracy theory.

“NO proof or evidence,” he wrote in an email.

The lawsuit, should it go forward, seems likely to help keep the spotlight on the issue of Russian election interference and possible collusion by the Trump campaign.

Both are being investigated by Special Counsel Robert Mueller, whose office declined to comment on the Democratic lawsuit.

Through the process of legal discovery, lawyers for the Democratic Party could force the defendants to produce documents they say relate to the collusion issue.

Democrats are keen to remind voters of the issue of Russia and the 2016 election ahead of November’s midterm congressional elections. Early polls show Republicans run some risk of losing control of Congress.

“The suit gives Democrats a useful and perhaps compelling narrative to counter the president’s and Republicans’ mantra of ‘no collusion,’” said Leonard Williams, a political science professor at Manchester University. “From that partisan standpoint, it is exactly what their candidates and spokespeople need.”

The lawsuit “might not have any journalistic, judicial, or political staying power,” Prof Williams said. “Whether it amounts to more than a story to tell remains to be seen. It might lead to additional discovery of events and relationships that we don’t yet know about,” he said.

1 Coronavirus: More ‘striking’ evidence BCG vaccine might protect against Covid-19
2 Boris Johnson remains in intensive care being treated for coronavirus
3 Coronavirus: Why are men twice as likely to die as women?
4 Coronavirus: Ireland can expect 400 deaths by August
5 Donald Trump’s clown car administration has put the fear in all of us
Real news has value SUBSCRIBE