‘A man was moving along the main streets stabbing people’ 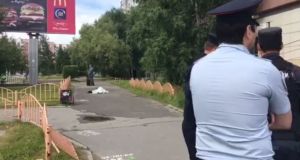 The scene where an alleged knife attacker (back, covered with white cloth) was shot by police, in Surgut, Russia on Saturday. Photograph: Russian Interior Ministry handout/EPA

Eight people were injured in a knife attack in the Siberian city of Surgut, the local office of the Russian law enforcement committee said in a statement published on its website.

“A man was moving along the main streets stabbing people”, it said, adding “the attacker has been killed.”

“The committee is investigating attempted murder”, the spokeswoman for the committee said by phone, adding she would not comment on whether the incident was terrorism related.

However, the motive for the midday attack on a central street in Surgut on Saturday has not been determined, the regional branch of the Investigative Committee said.

1 Covid-19 incidence in the Republic set to surpass that of UK
2 Coronavirus: Non-essential travel from US set to be banned within days
3 ‘Our hearts are broken’ – implications of fresh lockdown sink in
4 Taoiseach tested twice for Covid-19 but excused quarantine after Brussels trip
5 Motor dealer outlines EV reality on sales front
Real news has value SUBSCRIBE