Barcelona: ‘We escaped the Las Ramblas attack by inches’

‘It was at most 10ft away and coming right at us. The screen was cracked with a bullet hole’ 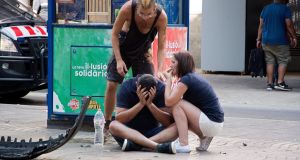 Injured people react after a van crashed into pedestrians in Las Ramblas on Thursday. Photograph: EPA

I woke up early yesterday morning. I normally don’t wake early. We set our alarm for 6:30 to get to the airport, as we were flying home from Spain. On Friday I don’t need an alarm because I have my own internal alarm: it went off sometime before 5pm on Thursday and it’s still ringing. I check my husband and son are beside me: they are safe.

I get up to go the bathroom and the bruise on my thigh makes it slightly sore to walk. This is my war wound. A physical reminder of what happened yesterday in Barcelona.

It’s about 4in long and 2in wide, bright purple and hard to touch. It’s quite unremarkable and a small price to pay. In some ways it’s a comfort. It reminds me that I am not crazy, that what happened was real. It is a temporary tattoo and will be gone very soon. I would imagine the emotional bruise will last a little longer.

I turned to my right, saw my husband’s expression of horror, and then the van. It was 10ft away and coming right at us

My son thinks that a moving bench may have hit me. He is six years old and he said he saw it. My husband wonders if it was a postcard stand, or the man who was hit beside me. I’m pretty sure it was not the van or I wouldn’t be writing this. I most likely ran into a bench and find it strange that I don’t remember. I remember everything else.

We had just left the El Corte Inglés supermarket and agreed to a quick stroll on Las Ramblas before returning to our hotel. My husband doesn’t really like Las Ramblas, and we had not been on this trip, but what is a trip to Barcelona without a visit to Las Ramblas? So, laden with our shopping, we agreed to grab an ice cream, soak up the ambience and go back to our hotel.

We were wandering slowly with the crowds when we heard the shots. Two loud claps, and then chaos. My husband shouted “run!” and we started to move.

It was over in seconds. Surprisingly for me, I learned that there is enough time in such moments to register that something is very serious. I knew they were terrorists. The crowds split, with people running to the sides at lightning speeds. But what were they running from?

I thought I would throw myself on my son in an effort to protect him. I am weirdly proud of this moment as I have always thought of myself as rather selfish, and can honestly now say that my priority was him.

I turned to my right, saw my husband’s expression of horror first, and then the van. It was at most 10ft away and coming right at us. The screen was cracked with a bullet hole. My son says that his ankle is twisted and that it is my fault. I’m sure he is right. I am not ashamed of this. I’m just surprised his arm is still attached to his shoulder given how hard I yanked it.

I close my eyes. We are not hit. My husband said it mounted the pavement on two wheels and just missed us. The driver evidently did not want to hit the newsstand behind us.

We crouched for a few seconds behind the stand, realised we were unharmed and checked on a nearby injured man. We did not hang around. We had no idea what else might happen. Before we knew it we were in a nearby restaurant where the manager boarded up the premises.

It is amazing how fast news travels when you are removed from the situation, but how slow it is when you are there. I must have spent 20 minutes Googling “Barcelona attacks”, “Las Ramblas terror” etc while my search yielded stories from two years ago. Was this Islamic State? I thought so. Were there many injured and dead? Probably. But it would be a while before we knew for sure.

We texted home, our batteries died and we waited. Four hours later, armed forces released us one by one with our arms over our heads. The rational part of my brain told me that they were there to protect us but the instinctive part was not so sure. They were dressed for raids, with heavy machine guns and shouting in a language I do not speak.

We were escorted in groups of 20 to the Plaça de Catalunya and briefly questioned. The officer wrote “nada” beside our names. This referred to how helpful we would be in relation to capturing the suspect, but it did not feel like “nada” to us.

It is strange watching the news. I keep looking for us or the man right beside us who got hit. The footage does not capture what we saw and many of those interviewed were much further away.

I am a psychiatrist and am wondering about post-traumatic stress disorder. The incident certainly qualifies. Five years ago I battled stage four cancer, so I’ve some experience with trauma and I get in touch with my mortality more often than most people my age. I sometimes think it makes me a better psychiatrist.

This might just be my way of coming to terms with a very difficult time in my life. I’m wondering what I will tell myself about yesterday. I was less scared going through it but may be more after it. I think that I am fine today, and then jump out of my skin when I hear an announcement or see someone running to catch a flight.

My son seemed OK but asked me why there were still sirens when we were in the hotel restaurant. Out of the blue, he said to both of us that he wished he had waited until he was 10 to come to Barcelona because then he would have been braver when the crazy man drove at us with the van. We both nearly cried.

When we get home our lives will return to normal. Our son will go back to school and we will go back to work. Most importantly, we will be safe. We will no doubt carry some effects but will mostly hold onto how lucky we are and how precious life is. My bruise will be gone long before the injuries of others who were there. While we will have difficult memories to process, we will thankfully not have to process loss.

I vow to hug my family tightly and tell them how much I love them. When I pray or meditate, which I need to do more often, I will now be thankful for my safety, in addition to my health and happiness.

We know we are lucky. We can move on. But what about the families in states riven by terrorism? This must be their daily struggle. I need to do more to help. We all do.