‘In a nuclear war, no one will win’ – Imran Khan 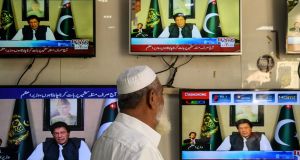 Pakistan’s prime minister Imran Khan has again raised the spectre of a nuclear confrontation with India over the Kashmir region, which is divided between the neighbours but claimed by both in its entirety.

In a countrywide televised address on Monday, Mr Khan said that “other countries should remember that both countries [India and Pakistan] have nuclear weapons. And in a nuclear war, no one will win”.

“The entire world will face the consequences [of a nuclear exchange],” Mr Khan said.

He was reacting to the Indian federal government’s decision on August 5th to revoke Kashmir’s seven-decades-old status guaranteeing its autonomy.

“I believe the entire nation [Pakistan] should stand with Kashmir,” Mr Khan said. Some days earlier Mr Khan had warned Pakistan’s parliament over the possibility of a “conventional war” with India over Kashmir, leaving the issue of nuclear weapons hanging in the air.

Pakistan’s army chief General Qamar Javed Bajwa also said that his county’s military would go to “any extent to support the Kashmiris”.

“India remains firmly committed to the doctrine of no-first-use, but what happens in the future depends on the circumstances,” Mr Singh said during a visit to the western Pokhran desert region, where India conducted five underground nuclear tests in May 1998.

Pakistan has refused to adopt a no-first-use doctrine, indicating it would launch nuclear weapons to defend itself, even if the other side did not use such weapons first. Pakistan’s nuclear weapons are also under control of its army.

In May 1999, a year after the neighbours emerged as nuclear weapons states, they fought an 11-week long border war in Kashmir’s mountainous Kargil region, in which more than 500 soldiers from both sides died.

The Kargil conflict threatened to escalate into a nuclear exchange, but the situation was defused by US intervention, with Washington compelling Pakistan to halt its military incursion into Kashmir.

“Singh’s comment on altering India’s no-first-use status with regard to nuclear weapons does signify a reopening of the entire debate that has not been conclusively resolved,” said military analyst Lieut Gen Vijay Kapoor.

The former head of India’s strategic forces command also suggested recently that India could not stand by and wait for an adversary to attack the country with nuclear weapons.