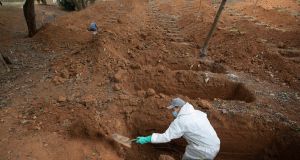 A cemetery worker digs graves in a section exclusively for Covid-19 victims at the Sao Luiz cemetery in Sao Paulo, Brazil on Thursday. Photograph: Andre Penner/AP

Coronavirus has infected more than 6.6 million people across the world and killed more than 391,000, according to a tally kept by Johns Hopkins University. Here are the latest updates on the pandemic from around the world:

The UK’s death toll from confirmed cases of Covid-19 has exceeded 40,000, according to government data published on Friday. In all, 40,261 people have now died following positive tests for coronavirus, the UK health ministry said, up 357 from the previous day. Including suspected cases, the UK’s death toll this week surpassed 50,000, according to a Reuters tally of official data sources.

The reproductive rate of coronavirus is now about one in the northwest and southwest regions of England, new data from Public Health England (PHE)suggests. However, Dr Yvonne Doyle, PHE’s medical director, said the latest estimates show that while regional reproductive rates, the so-called R numbers, have increased, they remain below one for most of England.

If its R number is one or higher, the virus will spread exponentially through a population. An R number of less than one indicates the virus is in decline.

Brazil reported 1,473 more Covid-19 deaths on Thursday, the biggest 24-hour increase in the country’s death toll since the outbreak began.

The figure equated to more than one death per minute and means the country now has the world’s third highest death toll.

Thursday was the third straight day with a new daily high for Brazil’s coronavirus deaths.

The country has reported more than 34,000 deaths from the virus so far, meaning it has surpassed the amount in Italy and trails only the UK and US.

Experts consider the tally a significant undercount due to insufficient testing.

Latin America as a whole has become a new focus of the coronavirus pandemic, with health officials urging governments there not to open their economies too fast and to avoid public crowds.

Mexican president Andres Manuel Lopez Obrador on Thursday defended his government’s handling of the coronavirus outbreak after a broader method of counting deaths led to an all-time daily high, outstripping even the United States. The health ministry reported 1,092 new deaths on Wednesday, more than double the previous daily record. Health officials said the number included many deaths that happened weeks ago and are now reclassified. The new count seems to confirm the pandemic has had a greater impact in Latin America’s second most populous country than the official numbers have shown until now. Going forward, the numbers could be higher on average than before, and officials said the review of prior deaths was ongoing. But Lopez Obrador said Mexico had the virus under control, emphasising that the new methodology did not mean 1,000 people had died in a day. “This is not New York,” he said during his regular morning news conference, referring to the hardest hit US city.

Argentina extended on Thursday a mandatory lockdown in Buenos Aires, the capital, and some other parts of the country until June 28, as confirmed coronavirus cases continue to rise, surpassing 20,000 earlier in the day. The three-week extension of the lockdown, which had been due to expire June 7th, will impact the capital city, the province of Buenos Aires and some other areas that account for the highest concentration of confirmed infections, president Alberto Fernandez said during a press conference. The rest of the country will move to a phase of “mandatory and preventive social distancing.” Argentina recorded 929 new infections on Thursday, one of the highest daily counts since the pandemic began. The country has 20,197 cases, mostly in the city Buenos Aires and the province of Buenos Aires. The death toll is at 608.

Scientists are resuming Covid-19 trials of hydroxychloroquine, as confusion continues to reign about the anti-malarial drug hailed by US president Donald Trump as a potential “game-changer” against the pandemic.

New York Governor Andrew Cuomo said extended demonstrations in the state after the killing of George Floyd could accelerate the virus’ spread, and urged protesters to get tested. The US unemployment rate likely shot up to almost 20 per cent in May, a new post second World War record, with millions more losing their jobs, exposing the horrific human toll from the Covid-19 crisis.

Australian prime minister Scott Morrison urged people not to attend planned Black Lives Matter protests around the country this weekend, citing the risk of spreading the coronavirus. Organisers expect thousands of people to attend rallies in Sydney, Melbourne and other cities. The protests have split opinion, with some state police and lawmakers approving the action despite the health risks. Morrison said people should find other ways to express anger following the death of African-American George Floyd in US police custody. Australia has reported daily single digit and low double digit numbers of new Covid-19 cases in recent weeks and has 490 active cases, with just 25 people in hospital.

South Africa has seen its largest daily jump in new coronavirus cases. The 3,267 new cases bring the country’s total to 40,792. More than 27,000 of those are in the Western Cape province centred on the city of Cape Town. South Africa has the most virus cases in Africa, where the total number is now above 163,000. The continent still represents less than 3 per cent of the global total of cases but South Africa and Egypt are hot spots, and Nigeria, Africa’s most populous country, is another growing concern with more than 11,000 cases and relatively little testing for the virus. Shortages of testing and medical equipment remain a challenge across the 54-nation continent, where just 1,700 tests are being carried out per one million people

Russia reported 8,726 new cases of the novel coronavirus on Friday, pushing the total number of infections to 449,834. Officials said 144 people had died in the last 24 hours, bringing the official nationwide death toll to 5,528.

The number of confirmed coronavirus cases in Germany increased by 394 to 183,271, data from the Robert Koch Institute for infectious diseases showed on Friday. The reported death toll rose by 26 to 8,613, the tally showed.

Spain will further ease a coronavirus lockdown in its two main cities from Monday, and will start opening its borders to foreign tourists from July 1st, its government said on Friday.

The European Union is preparing to use an emergency €2.4 billion fund for advance purchases of promising vaccines against Covid-19, EU officials told Reuters. The French government will mobilise €40 billion to support its hardest-hit industries, finance ministry officials said.

The Czech Republic is lifting all restrictions on travel to neighbouring Austria and Germany and also Hungary. Prime minister Andrej Babis said Czechs will be allowed into the three countries without a certificate that they have tested negative for coronavirus and a quarantine when they return home. The same applies to the citizens of the three countries entering the Czech Republic. The Czech Republic and Slovakia on Thursday cancelled all restrictions on their common border. Mr Babis has previously said the reopening of borders should boost tourism and trade that were badly hit by the pandemic.

China will promote the resumption of the tourism, culture and sports sectors, a top-level meeting chaired by the premier said, state radio reported.

India’s health ministry has reported another record spike in new coronavirus cases — more than 9,800 in the past 24 hours. India’s total number of confirmed cases now stands at 226,770 with 6,348 deaths, 273 of them in the past 24 hours, the ministry said. The ministry said the overall rate of recovery for coronavirus patients is around 48 per cent. There has been a surge in infections in rural areas following the return of hundreds of thousands of migrant workers who left cities and towns after they lost their jobs due to a nationwide lockdown. The more than two-month-old lockdown is now largely being enforced only in high-risk areas, known as containment zones. The government has partially restored train services and domestic flights and allowed the reopening of shops and manufacturing. E-commerce companies have started to deliver goods, including those considered non-essential, to places outside containment zones. Metro service and schools and colleges, however, remain shut nationwide.

Singapore plans to soon launch a wearable device for novel coronavirus contact tracing that, if successful, it will distribute to all of its 5.7 million residents, the government said on Friday.

Muslims in Indonesia’s capital held their first communal Friday prayers as mosques closed for nine weeks reopened at half capacity. Authorities checked temperature and sprayed hand sanitisers at the entrance to the mosques, and police and soldiers ensured the faithful observed social distancing and wore masks. Worshippers were asked to bring their own prayer rugs and were expected to stay at least one metre apart with no handshaking. Sermons were shortened. Indonesia has reported 28,818 confirmed cases and 1,721 fatalities. President Joko Widodo said his administration wants Indonesia’s economy back on track but safe from the virus. The government is deploying 340,000 security personnel to enforce health rules as the country gradually lifts restrictions by the end of July.

Fiji has declared itself free of coronavirus — at least for now — after all 18 people who tested positive recovered. Prime minister Frank Bainimarama said the South Pacific island nation had just cleared the last of its active patients. He wrote on Twitter: “And even with our testing numbers climbing by the day, it’s now been 45 days since we recorded our last case. With no deaths, our recovery rate is 100 per cent.” Fiji, which has a population of 900,000, imposed a lockdown in certain areas in April and put in place ongoing border restrictions.–PA, Reuters, Bloomberg, Guardian