Kremlin defends Moscow against criticism of move to lift lockdown 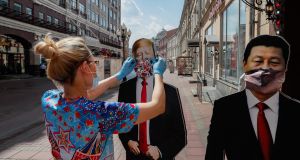 The Kremlin has denied that Moscow was too hasty in lifting its coronavirus lockdown on Tuesday, amid accusations that the move is linked to Russian president Vladimir Putin’s plans for a military parade and a vote that could allow him to extend his rule.

Moscow’s more than 12 million residents can now move around the city without restrictions or the need to obtain a digital pass, after mayor Sergei Sobyanin announced the phased lifting of rules that were introduced on March 30th.

The city accounts for 198,590 of Russia’s 485,253 cases of coronavirus. The country reported 8,595 new cases on Tuesday, 1,572 of which were in Moscow – the city’s smallest daily rise since April 16th. The national death toll from Covid-19 stands at 6,142, but the accuracy of Russia’s data has been widely questioned.

After being notable earlier in the pandemic for insisting on a strict lockdown, Mr Sobyanin’s decision to lift restrictions while the daily number of new infections remains high surprised many Muscovites.

Kremlin critics including Alexei Navalny say the reason for Mr Sobyanin’s turnaround is the need to create an air of normality before a huge June 24th military parade on Red Square and a July 1st national vote on constitutional changes, which would “reset” Mr Putin’s presidential term limit and allow him to rule until 2036.

“Why [do you say it is happening] too quickly?” Kremlin spokesman Dmitry Peskov said on Tuesday. “Some restrictions remain and others will be removed in the course of one to two weeks. It’s not a complete removal of restrictions.”

Mr Putin allowed regional leaders across Russia to decide on the scope and timing of their response to coronavirus, in what supporters called a sensible delegation of powers in the world’s biggest country, and opponents derided as an attempt to shirk responsibility for unpopular steps and potential mistakes.

Claim of too little help

Polls suggest Mr Putin’s popularity has dipped during the crisis, when he has been accused of giving too little financial help to individuals and smaller businesses.

“He used these powers and took this decision,” Mr Peskov said of Mr Sobyanin’s lifting of lockdown, noting that “naturally” the mayor must take responsibility for the consequences.

“There are doctors who welcome the move, while others have a different opinion. Naturally, a regional head makes decisions based on expert views,” Mr Peskov added.

Mr Sobyanin assured Muscovites it was safe to start removing restrictions because the rate of new infections and the number of people in hospital with Covid-19 were slowly falling; more rules will be lifted on June 16th and June 23rd – the day before the rescheduled parade to mark 75 years since the defeat of Nazi Germany.

“The battle is not over yet,” he said. “Nevertheless, I want to congratulate you on another joint triumph and on taking a big step towards returning to normal life.”

Mr Navalny wrote on Twitter: “If on June 23rd all coronavirus restrictions are cancelled and on June 24th in Moscow there will be a huge mass parade, does it mean that on Saturday June 27th . . . we can all meet for a protest against resetting Putin’s term limits?”