Hurricane Maria: At least one dead on Guadeloupe

Footage captured on the islands of Guadeloupe and Martinique show the high winds and rainfall caused by Hurricane Maria. 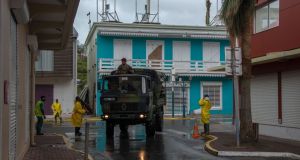 Soldiers patrol in a street in Marigot, on the French Caribbean island of St Martin, as preparations were made for the arrival of Hurricane Maria. Photograph: Helene Valenzuela/AFP/Getty Images 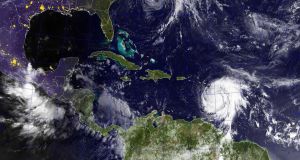 A satellite image of Hurricanes Jose (top) in the Atlantic Ocean and Hurricane Maria in the Caribbean Sea on Monday. Photograph: EPA 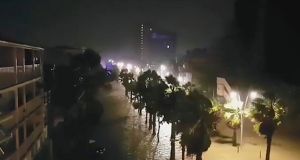 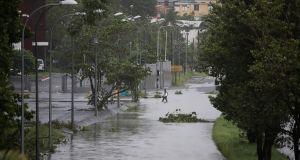 A person walks in a flooded street after the passage of Hurricane Maria in Pointe-a-Pitre, Guadeloupe island. Photograph: Andres Martinez Casares 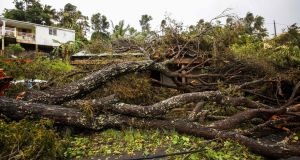 An uprooted tree covers a small wooden and iron house in the village of Viard-Petit Bourg, in the French territory of Guadeloupe, after the passage of Hurricane Maria. Photograph: Cedrick Isham Calvados/AFP/Getty Images 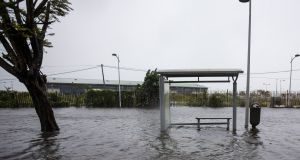 A flooded road and a bus stop are pictured in downtown Pointe-à-Pitre in the French territory of Guadeloupe, after the passage of Hurricane Maria. Photograph: Cedrick Isham Calvados/AFP/Getty Images 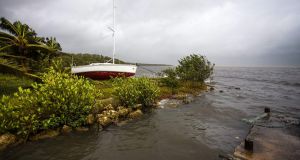 A stranded pleasure boat is pictured in Goyave in the French territory of Guadeloupe, after the passage of Hurricane Maria. Photograph: Cedrick Isham Calvados/AFP/Getty Images

Hurricane Maria has claimed its first life, with local officials reporting that someone was killed by a falling tree on the French island of Guadeloupe. Another two are missing after their boat sank, the officials said.

The hurricane, the second major storm to hit the Caribbean this month, crept towards the US Virgin Islands and Puerto Rico on Tuesday, after it ripped through the small island nation of Dominica, causing widespread devastation.

Maria regained Category 5 strength, the top end of the five-step Saffir-Simpson scale, as it churned about 240km southeast of St Croix in the US Virgin Islands, US forecasters said.

It was carrying maximum sustained winds of 260km/h, the US National Hurricane Centre (NHC) said, describing Maria as “potentially catastrophic”.

Maria had been downgraded to a Category 4 earlier on Tuesday.

The storm tore through Dominica, an island nation of 72,000 people in the eastern Caribbean, late on Monday, causing widespread devastation, prime minister Roosevelt Skerrit said in a Facebook post.

“I am honestly not preoccupied with physical damage at this time, because it is devastating . . . indeed, mind-boggling. My focus now is in rescuing the trapped and securing medical assistance for the injured,” he said.

With maximum sustained winds of 250km/h, the storm slammed into the island as a Category 5 hurricane, the NHC said.

“The winds have swept away the roofs of almost every person I have spoken to or otherwise made contact with,” Mr Skerrit said.

“The roof to my own official residence was among the first to go and this apparently triggered an avalanche of torn-away roofs in the city and the countryside.”

While the intensity of the hurricane may fluctuate over the next day or two, Maria is expected to remain a Category 4 or 5 storm on the Saffir-Simpson scale, the Miami-based NHC said.

The storm was on track to move over the northeastern Caribbean Sea and, by Tuesday night or early on Wednesday, approach the Virgin Islands and Puerto Rico, where millions are still reeling from Hurricane Irma earlier this month.

If Maria retains its strength, it would be the most powerful hurricane to hit Puerto Rico, an island of about 3.4 million inhabitants, in 85 years.

The last major hurricane to strike Puerto Rico directly was Georges, which made landfall there as a Category 3 storm in 1998, he said.

The governor of Puerto Rico, Ricardó Rossello, urged island residents on Twitter to prepare for the storm’s arrival, saying, “It is time to seek refuge with a family member, friend or head to a state shelter.”

Puerto Rico narrowly avoided a direct hit two weeks ago from Hurricane Irma, which reached a rare Category 5 status and ranked as the most powerful Atlantic storm on record before devastating several smaller islands, including the US Virgin Islands of St Thomas and St John.

US Virgin Islands governor Kenneth Mapp said Maria was due to pass late Tuesday night or early Wednesday within 16km of the island of St Croix, which escaped the brunt of Irma on September 6th.

The island is home to about 55,000 year-round residents, roughly half of the entire territory’s population.

Mapp warned that hurricane-force winds were expected to howl across St Croix for eight hours, accompanied by up to 46cm of rain that would be followed by nearly a week of additional showers.

At an evening news conference, he predicted most islanders would be without electricity for weeks, and that “some folks will not get power in months”.

A curfew will be imposed starting at 10am local time on Tuesday, he said.

Mapp asked the public for prayers and urged St Croix residents to take cover in one of three emergency shelters on the island.

For those choosing to stay in their homes during the storm, he said, they might consider climbing into a second-floor bathtub and pulling a mattress over them to stay safe in the event they lose their roofs.

Forecasts predict Maria will be the worst storm to hit St Croix since Hugo, a Category 4 storm, in 1989.

Irma killed more than 80 people in the Caribbean and the US mainland.

Beth Tamplin Jones (45) rode out Hurricane Irma earlier this month in the pantry of a friend’s house on St John.

“I don’t think anybody’s ever been hit by a storm like that. To see another one coming is just so discouraging,” said Jones, who fled to Puerto Rico last week and then caught a flight to Atlanta, where she planned to remain until Maria passed.

Maria was expected to whip up storm surges of up to 2.7m above normal tide levels, the NHC said.

Parts of Puerto Rico could see up to 64cm of rain, it said.

Maria marks the 13th named Atlantic storm of the year, the seventh hurricane so far this season and the fourth major hurricane - defined as Category 3 or higher - following Harvey, Irma and Jose, the NHC said.

Those numbers are all above average for a typical season, which is only about half over for 2017.