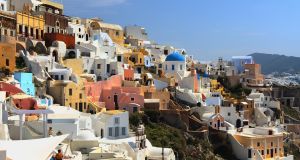 Santorini: the island is saturated with tourists and cannot absorb any greater numbers. Photograph: Getty Images/iStockphoto

A restaurateur in the west of Ireland recently asked me what I would pay in Greece for a meal. My answer: a salad, a plate of roast lamb and potatoes, a coffee and a half-litre of house wine, total cost about €14 – and this at one of the most frequented hostelries in Corfu. He blenched. “Leave the wine out of the equation, I couldn’t put the food on the table at that price.”

At present, Greece is attractive to tourists for its low prices. Beers from €1.50 a bottle to €4.50 for a pint of draught (depending on where you choose to drink), cigarettes at €4, happy hours at all times of day and night.

But you could be forgiven for thinking that the Greek government, under pressure from the EU, is intent on damaging tourism, the one growth industry in its shrinking economy. Having increased VAT from 13 per cent to 24 per cent and abolished the preferential tax rate for the smaller islands that are dependent on tourism, parliament last month passed what is perhaps the most perplexing law of its lifetime. From next year, it will be illegal for a taverna owner to put on the table olive oil from his own trees. It must be commercially branded.

Not only will this raise the cost of serving a meal (since oil is consumed in large quantities) but it also reduces the attraction of a local taverna which can proudly present local produce.

There are similar plans to prohibit the serving of village wine on the grounds that it encourages tax evasion. Since tax on alcohol is remarkably low in any case, this doesn’t hold water – or wine. Tavernas buy their wine locally in demijohns, enabling them to serve it at about €5-€6 per litre. You seldom see anyone asking for a commercial wine. Insisting on the exclusive availability of labelled bottles means adding to the total bill, which now stands in danger of rising from my user-friendly €14 to about €20.

Newspaper editors are consistently calling for the government to come up with a “credible narrative” – meaning a story that we can believe, because, between its own aspirations for self-determination and pressure from the EU to conform, it has lost the plot. The only successful narrative in Greece today is tourism, and yet the industry is bedevilled by lack of planning.

The basic problem is fourfold: first, every hotel development threatens the environment it is supposed to enhance – unspoilt vistas, empty beaches. Since there is no development agency for tourism, disasters happen on an unplanned regular basis.

Second, some locations, such as Santorini (among the world’s top 10 island destinations) are saturated and cannot absorb any greater numbers.

Third, the increasing numbers of cruise ships contribute almost nothing to local economies, since, like resort hotels, everything is provided on board, except the scenery of course.

Fourth, sensitive, responsible development is rare. So are innovations such as cultural tourism, which successive governments espouse but never deliver. Niche markets like golf, skiiing (yes, there are snow-slopes within striking distance of Athens) and cookery classes go unexploited. Some years ago, I presented the junior minister for tourism with a project for cultural tourism in Corfu. She swept it aside. She was MP for Corfu at the time. So much for local initiative.

Rising prices will only reduce Greece’s attraction to its regular markets – the UK and Ireland, Italy and northern Europe – leaving the landscape, and the tavernas, clear for the ever-increasing Chinese and Japanese markets.

In 1939 Henry Miller revelled in the earthiness, the honesty and the poetic nature of the Greek people and their landscape. But he could see westernisation as the danger. He wrote “When Greeks adopt the harness, they will cease to be Greek.”

No one disputes that, in order to do business in the global economy, efficiency, initiative and motivation are necessary. And so is change. But the strictures of austerity are stifling the areas where growth is possible. Last month, German finance minister Wolfgang Schäuble joked that one day Athens would commemorate him with a statue in gratitude for bringing austerity.

One of the consequences of a Schäuble-driven economy is that, with the minimum wage standing at €4 per hour, a school-leaver can expect to take home less than €400 per month while the average starting wage for a university graduate is €800.

Discouraged by lack of prospects and – even worse – lack of stimulus or encouragement, there is massive emigration by highly qualified graduates who know they can do better elsewhere. A boy in the village will get his MSc in robotics next year. He has no possibility of a job in Greece, but he already has a position to go to in London. One could paraphrase Yeats: that is no country for young people.