German election: Enshrouded in working-class myth, the SPD leader is destined for opposition 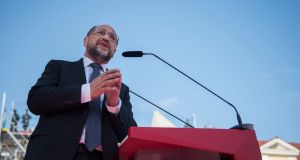 Martin Schulz, chancellor candidate of the German Social Democratic party (SPD): mood has changed since March as voters are likely to reject the 61-year-old, his party and manifesto as credible agents of change. Photograph: Steffi Loos/AFP/Getty Images

Ahead of Sunday’s federal election in Germany, the Social Democratic Party (SPD) rally looks right at home in front of the palace in Braunschweig.

The Lower Saxon city was flattened in October 1944 by allied bombers but the palace looks suspiciously intact because it was rebuilt in 2007: a facade wrapped around a shopping centre.

The SPD rally is a facade, too: band, beer and leaflets masking the disarray in Germany’s oldest party. The 150-year-old SPD has survived two World Wars, the Nazis and the communists – but it has never encountered anything like chancellor Angela Merkel.

She and her Christian Democratic Union (CDU) are likely to trounce the SPD for the fourth time on Sunday, with a 15-point lead in polls. In Braunschweig, as supporters study a new poll with just 20 per cent for the SPD, the song on the loudspeakers sounds like a bad joke: “It’s never too late for a fresh start.”

It is too late for SPD leader and Merkel challenger Martin Schulz. He is greeted with cheers, but it’s a poor echo of the euphoria in January when the European Parliament president was parachuted in as new SPD leader.

Backed by 100 per cent support of delegates in March, he pulled his party almost level with the CDU. But the mood evaporated quickly when voters rejected the 61-year-old, his party and manifesto as credible agents of change.

In Braunschweig, a few hundred supporters get the standard Schulz speech: his humble beginnings in the provincial town of Würselen, near the Dutch and Belgian borders, his time as an alcoholic bookshop owner then town mayor, and a European vocation inherited from parents who remembered the horrors of war.

His working-class, upwardly mobile biography hits all the right buttons with SPD voters, as do his shopping list of election “non-negotiables”: greater social spending on education and pensions, and vague promises of reform to “strengthen” the EU.

“On September 24th you have a choice between a chancellor who’s avoiding debate on all of this or someone who says where we want to to go,” he tells the crowd. “Merkel wants to manage the past, we have to shape the future.”

Schulz has a strong, quavering voice that would work as well in a séance as in stump speeches, where he can quickly stir up pathos.

But the SPD candidate falls down on logos and ethos: why his party still has such a long to-do list after 15 of the last 19 years in power; and why it has struggled to take ownership for its achievements in office, such as a minimum wage of €8.50.

Another dilemma is how to attack Merkel and her CDU, the SPD’s outgoing coalition partners, given Germany’s steady growth and a low jobless rate.

Critics have questioned Schulz’s credibility as working-class champion given his six-figure EU salary and pension. Then there is the SPD’s ongoing existential dilemma: reforms from 15 years ago that lifted the economy but decimated its voter base.

“They’re talking about social justice now before the election, but why not the rest of the time?” asks Tarik Dulich, a 19-year-old newspaper trainee. “They talk about jobs but it’s all casual, low-paid jobs these days.”

It was the SPD that opened Germany’s labour market to casual, low-paid employment and, from Brussels, Schulz backed the reforms.

Today, trapped between Merkel’s centrist CDU and the hard-left Linke, analysts say his SPD has failed to turn the corner because it is neither fish nor fowl.

“It is struggling to hold its core voters, let alone win over floating or new voters,” said Gero Neugebauer, a Berlin political scientist.

Instead of energetic optimism, the mood towards Schulz in Braunschweig hangs somewhere between respect, apathy and pity.

“There’s no mood for change,” said Jörg Radek, a local police union representative, who wishes the SPD was more pugilistic. “Since 2005, the CDU has been responsible for domestic security, and their spending cutbacks have had the result you can imagine, but the SPD doesn’t go after that.”

Schulz’s final problem: like all SPD challengers before him, he has tried and failed to get a rise out of Merkel. Early on, he attacked her somnolent campaigning style as an “attack on democracy”. Merkel replied, wearing an indulgent smile, that “elections are very arduous”.

A recent television debate, Schulz’s only direct face-off with the chancellor, was hyped beforehand as a “duel” but dismissed afterwards as a consensual “duet”.

Even as his party plummets in polls, the SPD leader reiterates his determination to be Germany’s next chancellor. His only options: a three-way alliance with the Greens and either the liberal Free Democrats (FDP) or the post-communist Linke.

While the SPD leader has ruled nothing out, party officials insist they are politically unlikely and, given current poll numbers, arithmetic impossibilities.

Rather than a third, humiliating grand coalition with Merkel’s CDU, a four-year period in opposition to regroup seems likely. Regardless of Sunday’s result, Schulz – pointing to his election with 100 per cent support in March – has vowed to stay on as leader. After all, as the SPD campaign song tells us: it’s never too late for a fresh start.