SPD slumps in polls a week before German election 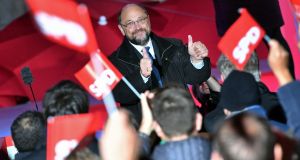 Germany’s Social Democratic Party faces meltdown a week before the federal election, after a slump in support to just 20 per cent.

If its poll ratings are borne out in a week’s time, the election result will be the worst-ever for the party and a humiliation for Martin Schulz, who is challenging Angela Merkel for the chancellorship.

Six months after he was elected SPD leader with 100 per cent party support, Mr Schulz has watched his popularity evaporate and a 17-point lead open up to Dr Merkel’s Christian Democratic Union (CDU). Dr Merkel’s party, in power since 2005, is steady on 37 per cent.

The last ARD public television poll before the September 24th election had another shock: the hard right Alternative für Deutschland (AfD) is on third place with 12 per cent. That leaves Germany’s newest party just eight points behind its oldest.

Germany’s next Bundestag is likely to be its most crowded ever, with six political parties. The liberal Free Democrats (FDP) is in fourth place with 9.5 per cent, according to the poll, followed by the Left and Greens on nine and 7.5 per cent respectively.

The final result in a week’s time could yet contain some surprises as the ARD poll, conducted by the Infratest polling agency, revealed that 43 per cent of voters had yet to make up their minds.

Another poll on Friday gave the SPD 23 per cent, level with its worst-ever result in 2003, with the AfD neck-and-neck for third place with the FDP.

Polling agencies say they have corrective factors to compensate for potential AfD voters not admitting their intentions in interviews.

While Dr Merkel and her CDU is likely to lead Germany’s next government, the polling executive said the mood among the German electorate was “volatile”.

In six months, the SPD – currently the junior partner in a coalition with the CDU – rose almost level with the CDU in polls before collapsing again in recent weeks.

“In 20 years I have not seen anything like that,” said Michael Kunert of the Infratest polling agency. “That is a perfect example of how short-term certain moods can bubble up.”

“The SPD abandoned its traditional centre-left working class base, so now the voters have abandoned the SPD,” said Dr Gero Neugebauer, a political scientist in Berlin.

Recent polls have suggested that voters are most preoccupied with the quality of German education and the country’s run-down schools, followed by terrorism fears and old-age poverty.

“People are permanently flipping back and forth,” said Prof Stefan Grünewald, an electoral psychologist, to Zeit Online.

The likelihood of six parties in the Bundestag makes it impossible to predict the make-up of Germany’s next government, though a CDU-FDP-Green alliance – which would be Germany’s first three-way coalition – an increasing possibility.