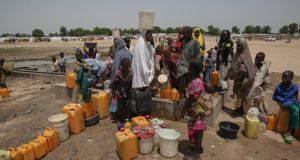 In the early hours of a Friday morning in August, aid workers staying in a United Nations compound in Maiduguri, northeast Nigeria, were woken by the sounds of soldiers.

This was not an attack, like the suicide bombings which had roused them on other nights over the past few months, but a search by the Nigerian military. For days beforehand, rumours had been spreading online that, hiding among the compound’s grey tents, dingy dining room and bug-attracting metal rows of showers, was Boko Haram leader Abubakar Shekau.

Shekau wasn’t there, and neither did the military find any evidence of other members of the Islamist terrorist group.

This unauthorised entry to a compound where international workers already feel vulnerable underscored the simmering tensions between Nigerian authorities and aid agencies, who provide lifesaving care across the Lake Chad region – currently the scene of one of the largest and most overlooked humanitarian crises in the world.

Eight years after the insurgency by Islamist militant group Boko Haram started, the scale of need is colossal. In northeast Nigeria alone, 2.5 million people have been displaced, half of them children. Almost 100,000 have been killed, according to official figures. About 700,000 remain in areas too dangerous to access, their living conditions unknown.

Before the conflict, 80 per cent of the local population were living off agriculture. While some returned home after an advance by the Nigerian military in 2015 reclaimed large swathes of territory, land remains insecure, and many civilians are too afraid of abduction or murder by militants.

The summer rainy season has turned rural roads into muddy swamps, meaning essential provisions can’t reach the camps for the displaced dotted across the northeast.

As many as 450,000 children could suffer from acute malnutrition this year, aid agencies warn.

In the emergency room of a clinic for malnourished children run by the aid agency Médecins Sans Frontières in Gwange, Maiduguri, I saw some of them. I spoke to women holding skeletal babies, too fatigued to cry. They lay listlessly, nutrients pumping through a tube into their noses because their mouths were unable to swallow.

In a mosquito-infested tent sheltering children admitted for observation, mothers and babies lay together on a line of beds. One tiny infant snuggled his mother’s back as she slept, her face away from him. His little hand was curled in a fist, poking outside an orange and pink blanket.

Guiding me around, Dr Matthew Ebenezer explained that typically children get sick with an illness first – such as diarrhoea or measles – but that can quickly lead to malnourishment and emaciation if they don’t get the right treatment.

At least 20 children are taken to this MSF clinic each day, but many more can’t make it to medical care, Ebenezer said, because of a lack of transport. “If there’s no means to get to the hospital they might give them medication in the camp clinic and just send them back to their tent,” another doctor said.

One of the camps without a designated ambulance is Muna Garage, on Maiduguri’s outskirts – home to tens of thousands of the displaced. “Everyone is hungry,” said Albert Kelvin, a health worker with the UN children’s fund, Unicef, who treats children on site, before lamenting: “We don’t give food, we only give drugs.”

Sitting on a bench, waiting to speak to Kelvin, was Fatima Mamman. The 30-year-old was cradling her 18-month-old baby, a boy suffering from diarrhoea. Mamman used to be a seamstress in Konduga, 45km to the southeast. She ran her own shop. A sewing machine would start her life again, she said, but instead she lives on the little food that other charities hand out.

Because the crisis here is still at emergency level, there’s no investment to help the displaced get back on their feet. “It’s Maslow’s hierarchy of needs,” one Maiduguri resident commented. “Food has to come first.”

The lack of global attention given to Nigeria’s northeast means there have been ongoing funding shortfalls. In June, the World Food Programme announced that plans to feed 1.8 million Nigerians this year would have to be scaled back, with 400,000 people dropped from the scheme completely.

One of the countries that has offered assistance is Ireland, with the Government pledging ¤5 million euroin February, on top of €6 million given last year. “Progress towards peace requires our firm and united support and Ireland stands in solidarity with the people of north east Nigeria and the Lake Chad region,” said the minister of state for international development Joe McHugh.

While the Nigerian government supplies aid too, its widely-criticised efforts have been dogged by extreme corruption. In June, the government admitted half of the food they wereit was sending to the north east was going missing along the way.

“Northeast Nigeria’s humanitarian crisis is man-made, both in terms of its causes (Boko Haram attacks, decades of poor governance, and heavy-handed counterinsurgency tactics) and the Nigerian government’s slow, bureaucratic, and corruption-plagued response to it,” said Matthew T Page, a fellow at the Centre for Democracy and Development in Abuja.

As it stands, three quarters of displaced people don’t get the recommended number of calories per day, according to a report by Save the Children.

Poor sanitation, restricted access and a lack of treatment facilities also make the possibility of a major outbreak of disease highly likely, doctors say. Polio has come back to the region. Cholera is another concern. Last month, MSF announced that more than 400 people of 45,000 sheltering in the remote Ngala camp had been infected with Hepatitis E, with four pregnant women dying as a result of complications – tragedies that might have been prevented if they had had access to soap and water.

Two thirds of medical facilities have been damaged in the conflict with Boko Haram, according to the World Health Organisation, so the response to any outbreak could take a long time.

“The aid still doesn’t reach enough people in the hard-to-reach areas,” said Kate Nolan, head of mission for Nigeria at MSF. “Hundreds of thousands of people remain almost entirely dependent on aid for their survival. A rupture in the provision of this lifesaving assistance could have deadly consequences.”

Within the aid community there are tensions. Last year, MSF accused the United Nations of “failing in their responsibility towards the crisis”. Nolan, who is Irish, said MSF and the World Health Organisation were mostly operating alone in 2016. Page, a former Nigeria expert for the US state department, said the failure of international NGOs to talk openly about their own shortfalls and missteps also makes it difficult for outside observers to assess the situation.

Aid distributions can lead to chaos, as desperate people begin to jostle for food. Everywhere you go people will tell you of the gnawing hunger which forces them to think only of their next meal.

Among the displaced, the vast majority aren’t in official camps, but live among local communities in land donated or rented to them. The population of Maiduguri, the largest city in the northeast and capital of Borno State, has doubled since the war began.

Urban refugees often live in the direst conditions. Fanna Mohammad’s story is typical. She sleeps in a Maiduguri room measuring about six by seven feet with her six children and her husband. The roof leaks when it rains. They’re living off a bag of rice they received from an aid agency three months ago, but when that runs out she doesn’t know what will happen next. They’re also about to be evicted, after falling behind on their rent payments.

Like almost everyone I spoke to who had been forced from their home, Mohammad has no conception of a future anymore. Her children aren’t in school, and her husband begs in the market each day. Three of her nieces were abducted.

“We’ve had no help from the government since we’ve arrived,” she said. “All I can do is pray.”