Trump and Kim ‘can understand each other’, says leading expert 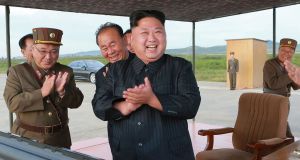 Establishing trust and ensuring verification is crucial to resolving the Korean nuclear crisis, especially to achieve a solution similar to the one involving Iran’s nuclear programme, a leading east Asia expert said in Bejing on Monday.

François Godement of the influential think tank the European Council on Foreign Relations told a gathering of journalists that, after years of multiple negotiations, achieving this will be a major challenge. “The issue of trust and verification is paramount,” he said.

The stand-off between North Korea and the United Nations over the former’s nuclear weapons programme has intensified in recent weeks with ballistic missile launches and a claimed hydrogen bomb test.

The UN Security Council has unanimously backed stiffer sanctions against North Korea to try to force an end to the programme.

The possibility of striking a deal similar to that struck with Iran in 2015, whereby the country got relief from sanctions in exchange for limits on its nuclear programme and assurances it would not build a bomb, has been backed by leaders such as German chancellor Angela Merkel.

“The [Iran and North Korea] problems are not really similar. Iran has a very different mix of interests, and is a well-connected country. In Iran there has always been a degree of verification going on, and the agreement that was signed provides for a lot of verification,” said Mr Godement.

“By contrast in North Korea, the reason they left the Non-Proliferation Treaty in 1991 is basically because they wanted to keep the cameras out of the Yongbyon nuclear site,” said Mr Godement. “A key feature of all the agreements signed since is that there was no verification.”

A common complaint from some actors in the crisis, especially China and Russia, is that sanctions don’t work, although both have backed recent intensified sanctions against North Korea.

“The sanctions process has been increasingly toughened,” said Mr Godement. “China, in the same breath, says it is not the solution. I tend to concur in part, because, like electric shocks that are repeatedly administered, you can sometimes get used to them. North Korean society has even more resistance than other societies to sanctions because it has already experienced a terrible hardship in the 1990s [when up to one million people died in a famine].”

Mr Godement’s message is not entirely without optimism. There were very possibly secret talks going on right now to resolve the crisis, he said. Developments in North Korea had always come about because of secret talks. At the same time, Kim Jong-un remained hard to predict.

“We today with this new leader have this new and paradoxical situation where we have elements of internal reform that combine with totalitarianism,” said Mr Godement. “There is some hope that the North Korean leadership will at one point adhere to the idea of regional stability but we’re not yet there.”

US president Donald Trump demonstrating flexibility and pragmatism could have a positive impact, but finding a deal is going to take a lot of preparation and dialogue.

“Paradoxically the two characters [Kim and Trump] are ripe for talk, because I think they can understand each other, but the situation is really difficult,” he said.

Mr Kim wants “regime warranty”, a guarantee that his regime be allowed to survive.

“That almost by definition cannot be given unless we all conspire and co-operate to help the regime endure, which is really asking a lot and cannot be achieved,” said Mr Godement.