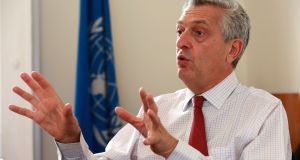 Record numbers of refugees – and the forced mass movement of many more from conflict, poverty, disease and climate change – have made the planet a more troubled place and Filippo Grandi’s job more challenging.

Complicating the search for solutions is the political shift to the right and the surge in nationalism in this period that the head of United Nations refugee agency calls “the age of egotism”.

Grandi, the UN’s high commissioner for refugees, during a visit to Dublin this week set out the challenges of how to deal with a global map of some 71 million refugees and displaced people among the “bigger phenomenom of human mobility”: the movement of hundreds of millions of people fleeing violence, disease and discrimination.

“We want to ensure that nobody gets sent back home if he or she is at risk of their lives. But then we have to also mobilise different resources and different types of responses to make sure that those causes are also addressed. So it’s size and complexity; it’s not just the size of the phenomenon,” he said.

“If they closed borders, then you have millions of people trapped in conflict, or trapped in situations of violence and persecution, so that rhetoric has an imitation effect that can be lethal for millions of people,” Grandi told The Irish Times in an interview between meetings with President Michael D Higgins, Taoiseach Leo Varadkar and Tánaiste Simon Coveney.

Scapegoating refugees to exploit public apprehensions about globalisation, security, employment and values is “very dangerous” because it is “intimately linked to hate speech and xenophobia”, says Grandi.

These are similar to the dynamics witnessed in Europe 80 years ago and pose dangers for “our own survival as a civilization” and “fundamental values of living together”, he warns. More practically, closing borders, building walls and pushing back foreigners is “fundamentally ineffective” and “profoundly unstrategic” in solving the underlying problems that cause forced migration.

“In 50 years, if this happens, we will be in the same situation if not worse. We will not have solved the problem of demographic imbalances, of conflict, et cetera. We will have a bigger problem; we will have a worse kind of society in terms of quality and, frankly, it will be too late then to address it,” he says.

On Ireland’s record of accommodating refugees, Grandi says the numbers have been “relatively small so far” but that they have been “managed well.” Still, he says “there is, of course, always space for improvement”.

At present, there are 6,108 people being housed in the Government’s “direct provision” system – the temporary accommodation centres for refugees set up on an “interim” basis in 2000.

The 15-month average waiting time for an asylum seeker to have their case adjudicated is “a bit long,” he says. He discussed plans with Minister for Justice Charlie Flanagan to reduce it “by several months.” The target is nine months.

He recognises there is a housing crisis, leaving a further 760 asylum seekers in emergency accommodation in hotels and guesthouses, but says the Government is “relying too much on the private market”.

“For governments this is a practical way to proceed but if the housing market, especially in cities, has a problem, then you have to look at alternatives. So either the government has to put in some more resources, or you have to distribute asylum seekers, to areas where perhaps it’s a little bit less attractive for them but it’s easier to find lodging,” he says.

The Supreme Court’s decision to strike down an absolute ban last year on people in direct provision working was “a good move in the right direction” as they could become self-reliant and would likely find their own accommodation.

“It’s a virtuous circle you trigger, instead of keeping people away from work, and therefore dependent on given assistance on direct provision, which perpetuates dependency,” he said.

Grandi is pleased that any anti-immigrant activists are a small group in Ireland and on the fringes, but he is concerned about the arson attacks on hotels in Donegal and Leitrim earmarked for direct provision centre. He has learned from other countries not to underestimate these threats and believes, where ill-feelings have taken root, that dialogue helps reassure the public that refugees are “actually people fleeing from danger rather than the opposite”.

He argues that “community sponsorships” – where towns and villages support the integration of a refugee family – are “the best antidote to these negative trends; it depoliticises completely the refugee question”. The concept is still only being piloted in Ireland but Grandi would like to see programme extended and regularly researched.

Further afield, the UN chief says the humanitarian crisis caused by the Syrian civil war that has spilled 5.6 million refugees into Lebanon, Jordan and Turkey can be fixed only with conflict resolution. There is a reluctance, he adds, to support Syria, pending a political solution, in catering for the needs of migrants returning to large areas of relative stability.

“These need to be depoliticised; they cannot be seen through a political lens. If people go back, they have to be supported,” he says.

Elsewhere, Grandi criticised the EU policy of supporting Libya’s coast guard, which has been intercepting refugees and migrants fleeing to Europe and returning them to dangerous detention centres across Libya.

“The challenge in Libya is that we know that about 60 to 70 per cent, we think, of people who try to leave Libya by boat are now intercepted by this coast guard reinforced by the Europeans. Then they are disembarked back into Libya, and they go straight into detention centers where conditions are truly appalling and from which we then have to work hard to extract them,” he said.

The UNHCR has asked that 5,600 refugees and migrants in the centres to be freed. Grandi hopes that a positive response can flow from an air strike that killed at least 53 migrants at the Tajoura detention centre in Tripoli last week and that a “vicious circle” for those fleeing and being returned to the war-torn country can be “unblocked.”

He condemned the EU for winding down Operation Sophia, the migrant rescue operation in the Mediterranean Sea, which included the Irish naval ship, the LÉ Eithne, and which ends in September. This was “really irresponsible of Europe to have weakened so much the rescue capacity”, he says, pointing out that it has led to a much higher ratio of migrants drowning at sea among those who attempt to cross to Europe from north Africa.

“This cannot be tolerated: risking lives at sea. This is not about refugees, migrants; it’s in the law of the sea. It’s a very ancient legal provision and tradition, a legal tradition of Europe,” he says.

The Italian diplomat was himself once a migrant in Ireland – an educational one – when he studied English as a boy in Dublin in 1969. He recalled watching the Apollo 11 moon landing with the family who hosted him in Blackrock.

This week, he was impressed by the “powerful sign” sent out by President Michael D Higgins about how Ireland embraces foreign migrants when he hosted him and four long-settled refugee families at Áras an Uachtaráin.

“I have met many refugees and a few presidents in my career, but never together,” he said.

Grandi recalled how deeply rooted and strong local culture was when he first visited a half-century ago this week. “Now I see that this local culture is able to have an international dimension,” he says, “and the two are not contradictory.”