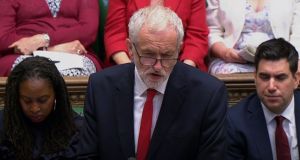 Labour’s deputy leader Tom Watson has called for party members facing credible accusations of anti-Semitism to be automatically excluded from the party.

Mr Watson was speaking after a BBC Panorama report alleged that figures close to Jeremy Corbyn had interfered in the investigation of complaints about anti-Semitism.

Mr Watson praised the former party staffers who broke non-disclosure agreements to appear in the documentary. And he called on Mr Corbyn to back rule changes to allow for the exclusion of party members facing a prima facie case of anti-Semitism.

Labour has condemned the Panorama documentary as “politically one-sided” and “seriously inaccurate”, insisting that general secretary Jennie Formby had improved procedures for dealing with complaints.

I am shocked, chilled and appalled by what I’ve just seen on Panorama. Hearing the testimony of party members and former staff was harrowing. They are not “disaffected”, they have been incredibly brave. Very serious questions now have to be answered.

I haven't rode out publicly because what can I possibly say. I found Panorama worse than I expected. The Labour party response tells me that they don't care.

I know some of the staffers on tonight’s Panorama. They joined the Labour Party, like me and most party members, because they hate racism as much as they hate poverty. A statement accusing them of having “political axes to grind” is deeply wrong and indefensible

This is not a fair or balanced investigation, it is an authored polemic, with no political balance of interviewees, quotes invented and emails edited to change meaning. It is an overtly one-sided intervention in political controversy by the BBC. #Panorama

“Since Jennie Formby became general secretary the rate at which anti-Semitism cases have been dealt with has increased more than fourfold. We will build on the improvements to our procedures made under Jennie Formby, and continue to act against this repugnant form of racism,” the party said.

The Jewish Labour Movement (JLM) said on Thursday that 30 current and former Labour staff members had given witness statements for the group’s submission to a statutory investigation into anti-Semitism in the party.

The Equality and Human Rights Commission (ECHR) announced last May that it was launching an investigation into whether Labour unlawfully discriminated, harassed or victimised Jews.

Mr Watson has written to Ms Formby demanding that she publish the party’s official response to the ECHR investigation and accusing Labour of failing those who appeared in the Panorama programme.

“The way that they have been smeared, including by Labour spokespeople, is deplorable,” he wrote.

“Even if some in the party did not want to hear what they had to say, it is unacceptable to attempt to undermine their integrity and characters in this manner.”

In its response to the Panorama programme, Labour rejected any claim that the party is anti-Semitic and said it was taking decisive action to root out anti-Semitism from its movement and from society.

“The Panorama programme was not a fair or balanced investigation. It was a seriously inaccurate, politically one-sided polemic, which breached basic journalistic standards, invented quotes and edited emails to change their meaning. It was an overtly biased intervention by the BBC in party-political controversy,” the party said.

“An honest investigation into anti-Semitism in Labour and wider society is in the public interest. The Panorama team instead pre-determined an answer to the question posed by the programme’s title. No proper and serious attempt was made to understand our current procedures for dealing with anti-Semitism, which is clearly essential to reach a fair and balanced judgement. And Panorama distorted and manipulated the truth and misrepresented evidence to present a biased and selective account.”

1 Woman stranded in Ireland due to pandemic has ‘miracle baby’
2 Australia demands answers after women taken from Qatar Airways flight and strip-searched
3 Transmission of Covid-19 on flight into Ireland linked to 59 infections
4 Covid-19: Public urged to ‘stay at home’ as 1,025 further cases confirmed in State
5 US election: ‘Donald Trump needs to go. White America got what they want’
Real news has value SUBSCRIBE