US wrap: Robert Mueller to deliver testimony to judiciary and intelligence committees 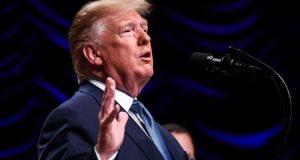 US president Donald Trump: Jared Kushner and Jeff Sessions are among the dozen Trump associates who have been served with subpoenas. Photograph: Kevin Dietsch/Pool via Bloomberg

A dozen people connected to Donald Trump – including his son-in-law Jared Kushner – have been issued with subpoenas by the House Judiciary Committee, ramping up tensions between congressional Democrats and the president ahead of next week’s testimony by special counsel Robert Mueller. Former Trump campaign manager Corey Lewandowski and former attorney general Jeff Sessions were also among those subpoenaed by the House committee which is continuing to investigate whether the US president obstructed justice.  “We will not rest until we obtain their testimony and documents so this committee and Congress can do the work the constitution and the American people expect of us,” Jerry Nadler, the chairman of the judiciary committee, said.

Mr Mueller, who led the 22-month investigation into Mr Trump’s links with Russia, will appear before the house judiciary and intelligence committees next week, in two highly anticipated hearings. Mr Trump hit out at both the fresh subpoenas and Democrats’ decision to hold a hearing with Mr Mueller, arguing that they should be focusing on immigration issues instead.

“How many bites at the apple do they get before working on Border Loopholes and Asylum,” he tweeted, claiming that Democrats had already “spent a fortune on lawyers”. He also criticised their decision to interview “the highly conflicted and compromised Mueller”.

“He said he was ‘done’ after his last 9 minute speech, and that he had nothing more to say outside of the No Collusion, No Obstruction, Report. Enough already, go back to work!”

With Mr Trump expected to make an announcement on adding a citizenship question to the 2020 census form later on Thursday at a press conference in the White House, multiple reports said that a fresh crackdown on undocumented immigrants will begin this weekend.

Mr Trump had threatened to sanction the rounding-up of undocumented migrants last month, but delayed the measure by a few weeks. The new initiative is now expected to begin as early as Sunday.

Officials from the Immigration and Customs Enforcement (ICE) agency will focus on 10 US cities, and will target recently arrived immigrants, and those in breach of court orders.

The renewed focus on immigration comes amid signs on Thursday that the US president was preparing to back away from his pledge to add a question on citizenship to the 2020 census form, after the US Supreme Court ruled last month that the Trump administration’s rationale for adding the question “appears to have been contrived”.

The inclusion of a question on citizenship has become a highly fraught political issue in the United States. Democrats argue that it would discourage many immigrants living in the United States both legally and illegally from completing the form. This in turn would under-represent the number of people in the country, in a way that will most likely benefit Republicans, given that the majority of residents in the country without US citizenship are non-white and Democrat-voters. As well as dictating the allocation of congressional seats, the census also dictates how billions of federal dollars are allocated each year.

Mr Trump had indicated that he might use an executive order to circumvent the court ruling, but any such move would likely be frustrated by the courts.

In a highly unusual move, Mr Trump and attorney general William Barr replaced the legal team within the Department of Justice which had been working on the citizenship issue earlier this week.

Immigrants’ rights activists and Democrats had vowed to take legal action if Mr Trump proceeded with the executive order.

1 Chief medical officer urges people not to visit hardware stores
2 Coronavirus: Government to extend restrictions for at least two weeks
3 ‘When I look at the viral loads we find in elderly people, it is mind boggling’
4 Impact of coronavirus ‘overwhelming’ in Republic but for public-health controls
5 Coronavirus: Ireland will have to ‘live alongside the virus’
Real news has value SUBSCRIBE