China's Communist Party breaks with recent precedent by failing to include a clear successor to president Xi Jinping among its new seven-man leadership. Video: Reuters 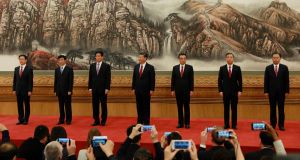 Xi Jinping has unveiled a new leadership team after a week-long Communist Party congress that strengthened the Chinese president’s grip on power and raised the prospect of him staying in office beyond 2022.

In a ceremony at the Great Hall of the People in Beijing, the seven men in dark suits walked out on to a stage in a room where domestic and foreign journalists were waiting.

Mr Xi described his selection as party head as “not just approval of my work, but also encouragement that will spur me on . . . We should never entertain the idea of taking a breather or halting our steps.”

Mr Xi and premier Li Keqiang were the only two on the politburo standing committee to hold on to their jobs. The five other men appointed to join them will be too old for leadership positions after the president finishes his second term.

The five new members are Mr Xi’s chief of staff and close ally Li Zhanshu (67); vice-premier Wang Yang (62), who is rumoured to be up for promotion to executive vice-premier at the parliamentary session in March 2018; party theorist Wang Huning (62); Shanghai party secretary Han Zheng (63); and Zhao Leji (60), who is head of the party’s organisation department which oversees personnel decisions. He replaces Mr Xi’s close colleague Wang Qishan as head of the anti-corruption body, the Central Commission for Discipline Inspection.

The make-up of the standing committee tallies with leaks in Hong Kong media and elsewhere in recent days. “The real surprise was that Xi allowed the list to be leaked days before. It shows he had it agreed before end of congress, and it reflected his choices,” said Steve Tsang, director of the SOAS China Institute in London.

The appointment of Wang Yang and Han Zheng, who would not be seen as allies of Xi, is aimed at showing that Mr Xi is now in control above all the factions in the party, said Mr Tsang. “He has made it clear he will not relinquish power at the 20th party congress [in 2022] so the issue of a successor is now moot,” said Tsang.

The appointments came after a twice-a-decade congress of the Communist Party. In his remarks, Mr Xi said that the party would continue to reform, without giving specifics.

“We will review our experience and build on the good momentum to continue modernising China’s system and capacity for governance, and make determined efforts to comprehensively deepen reform and open China still wider to the world,” he said.

Establishing the significance of actions in the party is difficult as decisions tend to be made behind closed doors.

The current system of power transfer was introduced by former supreme leader Deng Xiaoping in 1992, as he tried to shore up stability after the 1989 crackdown on democracy demonstrators.

Party secretary in Guangdong, Hu Chunhua, who recently visited Ireland, and Chongqing party boss Chen Miner, had been mentioned as possible heirs, but they were not included in the standing committee. Another ally, Ding Xuexiang (55), has also been tagged as a possible successor.

Although they are not on the standing committee, they were included in the 25-member politburo, which is one level below, and it is possible they might be promoted in due course.

The week-long congress, the most important date in China’s political calendar, has done much to copperfasten Mr Xi’s grip on power.

In a 3½-hour speech to open the conference last week, Mr Xi outlined a vision for the world’s second-biggest economy, a moderately wealthy society free of corruption and pollution, backed by a strong military.

On Tuesday, his theory, Xi Jinping Thought on Socialism with Chinese Characteristics for a New Era, was enshrined in the party’s charter, giving him the kind of status not seen since the era of the Great Helmsman, Mao Zedong.

The next order of business for the new leader will be the visit of US president Donald Trump early next month.

1 Genetics shed light on origins of Irish strains of Covid-19
2 Irish doctors on getting Covid-19: ‘In 90 minutes, I deteriorated quite rapidly’
3 Europe prepares to ease coronavirus lockdowns
4 Coronavirus: Primary school measures are reinforcing inequality, report says
5 Donald Trump’s clown car administration has put the fear in all of us
Real news has value SUBSCRIBE