‘The police keep taking our sleeping bags’: life as a migrant in Calais

One year after demolition of ‘the Jungle’, many are now living in bushes and scrub around the French port

It's one year since the "Jungle" refugee camp in Calais, northern France was demolished but the area is still a magnet for migrants trying to reach the U.K. Video: Thomson Reuters Foundation 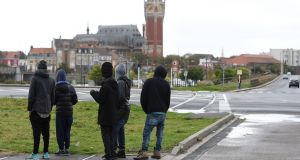 Migrants from Ethiopia on the streets of Calais, as one year on from the demolition of the camp dubbed ‘The Jungle’ migrants continue to stay in the town and attempt to cross the border to the UK. Photorgaph: Joe Giddens/PA Wire

One year after demolition of “the Jungle” where several thousand migrants once camped and cooked and made night-time attempts to cross the English Channel, a visitor might be forgiven for thinking homelessness was no longer an issue in the French port.

Double rows of steel fencing topped with rolls of barbed wire run for many kilometres around the ferry and Eurotunnel terminals, patrolled outside by armed French police, and inside by young uniformed recruits with the British Home Office Border Force.

Over in the dunes where there was once cafes, mosques and hairdressers amid shelters fabricated from timber and plastic sheeting, a vast area of flattened sand and earth stretches as far as the eye can see. The only trace left of human presence is graffiti under a motorway bridge.

Calais town, which was English territory over four centuries ago, bears all the signs of an economic downturn. One man in the street with his dog begs in fluent French.

Walk away from the centre to the Place de Norvege near the old railway line, however, and several dozen young north African men emerge hesitantly from shrubs and bushes – waiting to greet three or four vans and cars, bringing hot food provided by French and English NGOs.

“Do you have a tent – there is so much rain, and the police keep taking our sleeping bags,”one Eritrean, in his early 20s, asks one of the volunteers.

“So sorry, we can’t, the police won’t allow us,”comes the reply. “We just have to keep bringing you sleeping gear. So sorry, we might try for a tarpaulin...”

Several kilometres away, more French and English volunteers have brought soup to a group of young north African men living in woods close to one of the port’s many industrial zones.

“Ah Ireland, Robbie Keane, ” Kofi, a 20-year-old Ethiopian, greets this reporter. He is sodden wet, wearing a light jacket and runners. He shows me the clearing of trees where he and his friends sleep.

“We don’t get so much wind and rain here. But it would be so much better with a tent,” he says. Several minutes later, he and his friends in light plastic ponchos are praying to Mecca in a downpour.

Two years ago, there was a mood of quiet determination and optimism, as hundreds of Sudanese, Afghans, Eritreans and Ethiopians created makeshift homes in the dunes – making nightly forays to the port, or attempting to jump from motorway bridges on to passing trucks, including those with Irish registrations, bound for ships. Some sustained very serious injuries, and there have been numerous fatalities.

An estimated 3,000-5,000 people – mainly men but including a small number of women and children – were provided by the Calais authorities with one hot meal daily, toilets, running water, a shower and access to electricity for phone charging in the Jules Ferry Centre.

The former children’s leisure centre, named after an advocate of colonialism, had been converted by the Calais authorities after migrant numbers began growing from April, 2015.

“This week, the Jules Ferry Centre is being demolished,” says Francois Guennoc, a retired farm management lecturer who has worked with the French NGO, Auberge des Migrants, for almost four years. Guennoc firmly believes that his country has a responsibility to former colonies, and sees immigration as an opportunity for rejuvenation of parts of Europe, rather than a problem.

Guennoc has witnessed Europe’s inadequate response to previous “migrant crises” , including the camp set up in the late 1990s by the French Red Cross at nearby Sangatte for those fleeing conflict in Iran, Afghanistan, Sudan and Yugoslavia. It was closed in 2002 under pressure from Britain.

This time last year, temporary structures in “the Jungle”, including several built with the help of Irish NGO volunteers, were demolished amid an atmosphere of panic and confusion. Adult migrants were forced to queue for hours, given number bracelets and bussed to reception centres around France, while some unaccompanied minors were either taken away by police or were left to their own fate.

“Now the reception centres are full, and there is no ‘Jungle’, but we have about 700 migrants here since the beginning of the summer in Calais, and another 300 in Grande-Synthe close to Dunkirk,” Guennoc says.

The only support they get comes from a group of NGOs and church charities, including Auberge des Migrants, based in a Calais port warehouse with British organisation Help Refugees, the Refugee Community Kitchen, the Refugee Youth Service and Utopia.

“Most are still coming from conflict areas in north Africa, along with Afghanistan,” Guennoc says. “About 60 per cent are Eritrean and Ethiopian aged from 18 to 20, then about 30 per cent are Afghanis who are a little older, and 10 per cent are Sudanese. Most of them have already survived a trip across the Mediterranean.”

About 100 are unaccompanied minors who are under 18 years of age, while there are 10-14 women and a small number of younger children, he says. Showing me around the warehouse, one of his colleagues explains how up to 1,000 meals a day are prepared and cooked, and donated clothes and goods are sorted and stacked.

The tents that can no longer be distributed are still stored. There is a constant need for sleeping bags and men-sized shoes, as both are sometimes sprayed by police or removed.

“They might arrest some, but release them a few hours later as many have papers from a port of entry,” Guennoc says. “Under the [EU]Dublin agreement, they can be returned to this place of entry, but Italy cannot cope and they are back here in several days.”

A report published this week by Human Rights Watch has said it was “plausible” that police and gendarmes abused their powers by using violence against migrants. While acknowledging the difficulties of policing around Calais and Dunkirk, it highlighted systematic use of teargas, but it does not find evidence for use of pepper spray.

The French interior ministry has responded by saying there was no evidence to prove the most serious allegations by Human Rights Watch.

Clare Moseley of the charity Care4Calais believes Europe’s failure to respond sympathetically to the migrant issue is “buying trouble down the line”. She recalls how her grandparents lived through the second World War and still took in refugees.

She has met many young migrant men who move between Calais, Grande-Synthe, Dunkirk and Paris, trying to eke out an existence in the shadows, and developing severe mental health problems.

“I used to work in a big corporation where large amounts of money would be paid for team-building courses,” she says. “If we in Europe were to work together in a positive way, it would be the biggest team-building effort ever.”