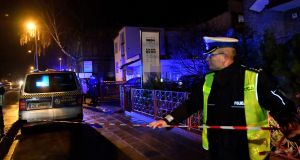 Police secure a scene of a fire in Koszalin, Poland, after five 15 year old girls were killed in a fire. Photograph: EPA

Five teenage girls have been killed and one man hurt in a fire that broke out at an Escape Room game location in northern Poland, officials have said.

The country’s interior minister Joachim Brudzinski said the girls were all 15 years old.

A police spokeswoman in the city of Koszalin, Monika Kosiec, said the victims were probably celebrating one of their birthdays.

A 25-year-old man has been taken to hospital with burns and could not be immediately questioned by investigators who are probing the cause of the fire, she said.

Ms Kosiec said the bodies were found after firefighters put out a fire that broke out at the location.

Mr Brudzinski ordered fire safety controls in all Escape Rooms, which are very popular with teenagers across Poland.

In an Escape Room game, the players are locked inside a room or building and must find clues that help them get out.

President Andrzej Duda said on Twitter it was a “crushing tragedy” that five young girls died so early in their lives.

Koszalin mayor Piotr Jedlinski announced that Sunday would be a day of mourning in the city.