Suspect on the run following fatal stabbing on train in England 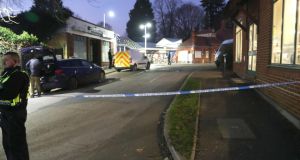 The scene at Horsley station near Guildford, England after a murder inquiry was launched following the stabbing of a man on board a train Photograph: Steve Parsons/PA Wire

A murderer is on the run in Surrey, England following the fatal stabbing of a train passenger in front of his 14-year-old son.

British Transport Police has told members of the public not to approach the suspect who killed a man, believed to be aged 51, on a train travelling between Guildford and London Waterloo stations on Friday.

Superintendent Paul Langley said: “What we know at the moment is that the victim boarded the train at around 1pm at London Road station in Guildford, along with his 14-year-old son.

“Traumatically, the victim’s son would have been nearby when his father was fatally wounded. This would have been an horrific and hugely traumatic event to have witnessed and we are providing him with as much support as possible.”

Officers were called to Horsley station at 1.15pm to reports of a stabbing on a train.

The victim was said to have suffered “multiple stab wounds” in the “frightening” attack.

The South East Coast Ambulance Service confirmed the man died at the scene.

No arrests have been made in relation to the incident, police said.

Detective Superintendent Gary Richardson, from British Transport Police (BTP), said: “This was a shocking and violent attack which took place on board a train in broad daylight.

A murder investigation has been launched following a stabbing on board a train at #Horsley station in Surrey.

We're urgently appealing for information and officers are searching an area in #Clandon.

“Officers from BTP are with the family and have deployed a specially trained family liaison officer to support them through this difficult time.

“We know that this was an incredibly frightening incident for passengers travelling on the train.”

Police believe the suspect and victim boarded the train at London Road station at 1.01pm, with the suspect then disembarking at Clandon station.

One social media user who said they had been on the train praised the “incredible” response of the guards and driver in a tweet to South Western Railway.

They wrote: “I was on this train, how those guards and especially that train driver went into action was nothing short of incredible. Not sure if it’s appropriate to say thank you, but I do hope everyone is ok after today’s event.”

A number of police officers and helicopters were deployed in the Horsley and Clandon area as a murder inquiry was launched.

Officers are urging any witnesses to the attack to get in touch.

Matt Phelps (35) who works at a business on Epsom Road in West Clandon, said police officers provided a description of the man they were hunting – a man with a beard and short hair, who was “not dressed for the weather” in a T-shirt and tracksuit bottoms, and strikingly bright white trainers.

He said: “There were also three helicopters circling overhead when we locked up and went home.

“It was a bit alarming when someone I worked with put two and two together and we realised who the police were looking for.

“You sometimes see the police helicopter going over or cars going past with sirens on but to think there was someone like that potentially hiding around the corner somewhere certainly made us want to pack up and go home quicker than usual.”

Oliver Thompson, a 16-year-old student living in Clandon, said he was stopped by police in the area at roughly 2.30pm and asked if he had seen a “man running from the station”.

A little later he saw police helicopters circling the area before being joined by “a police van with high-powered lights” as conditions darkened.

“It comes as a big surprise as Clandon is a quiet area that you wouldn’t associate with crime like this,” he said.

“It is definitely unnerving to think there is a murderer maybe somewhere in the village.”

Transport Secretary Chris Grayling tweeted: “The incident near Horsley is tragic, and our deepest sympathies are with the victim and their family. I urge anyone who witnessed what happened to contact BTP and SurreyPolice, by texting 61016 or calling 0800 40 50 40.”