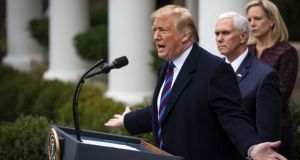 US president Donald Trump speaks to reporters in the Rose Garden after meeting with US congressional leaders about the government shutdown and border security. Photograph: Al Drago/Bloomberg

US president Donald Trump and senior Democrats failed to strike a deal in talks on Friday to end a partial shutdown of the US government as they again fought over Trump’s request for $5 billion (€4.3 billion) to fund his wall on the Mexican border.

After Democratic congressional leaders turned Mr Trump down at a meeting in the White House situation room, the Republican president threatened to take the controversial step of using emergency powers to build the wall without approval from Congress.

Mr Trump is withholding his support for a bill that would fully fund the government until he secures the money for the wall and as a result about 800,000 federal workers have been unpaid due to the closure of about a quarter of the federal government.

Administration officials, led by vice-president Mike Pence, and congressional staffers are to meet during the weekend to try to end the impasse over the 2-week-old shutdown.

“He resisted,” Schumer said. “In fact, he said he’d keep the government closed for a very long period of time, months or even years.”

Trump confirmed that comment but painted a more positive picture of the meeting, the first since a new era of divided government began when Democrats took control of the House of Representatives on Thursday.

“We had a very, very productive meeting, and we’ve come a long way,” Mr Trump said.

But raising the stakes in his tussle with the newly emboldened Democrats, Trump threatened extraordinary measures to build the wall, which he says is needed to stem the flow of illegal immigrants and drugs into the United States.

He said he could declare a national emergency “because of the security of our country, absolutely”.

The US constitution assigns Congress the power over funding the federal government so Mr Trump likely would face legal challenges if he tried to bypass Congress on financing the wall. Building a wall – and having Mexico pay for it – was one of Trump’s main promises when he ran for president in 2016.

Democrats have called the wall immoral, ineffective and medieval.

Nancy Pelosi, the newly elected Democratic speaker of the House, said Friday’s meeting with Mr Trump was “sometimes contentious” but that they agreed to continue talking.

“But we recognize on the Democratic side that we really cannot resolve this until we open up government and we made that very clear to the president,” she said.

Credit rating agency Moody’s says the shutdown will cause minimal US economic and credit market disruption but there could be a more severe impact on financial markets and the broad economy if the closure is protracted.

A Reuters/Ipsos opinion poll last week showed that 50 per cent of the public blame Mr Trump for the shutdown and 7 per cent blame Republican lawmakers, against 32 per cent who blame Democrats.

In a December 11th meeting with Mrs Pelosi and Mr Schumer, Mr Trump said he would be “proud” to shut the government over the security issue and would not blame Democrats. He has since said they are responsible.

The partial shutdown is straining the country’s immigration system, worsening backlogs in courts and complicating hiring for employers.

Federal agencies such as the Justice Department, Commerce Department and departments of Agriculture, Labour, Interior and Treasury have been hit by the shutdown. – Reuters