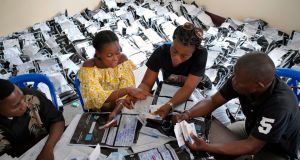 Democratic Republic of Congo’s electoral commission accused the country’s Catholic Church on Friday of “preparing an insurrection” by saying it knows the winner of last Sunday’s presidential election.

The commission is scheduled to release provisional results on Sunday but has said there could be delays because of the slow arrival of tally sheets.

Donatien Nshole, the secretary-general of the church’s bishops’ conference, known as Cenco, said on Thursday its vote tallies showed a clear victor in the December 30th election, a pronouncement widely seen as a warning to authorities against rigging the vote.

“The announcement of voting trends by Priest Nshole is likely to brainwash the population while preparing an insurrection that Cenco alone will be responsible for,” commission president Corneille Nangaa wrote in a letter to Cenco president Marcel Utembi.

The Catholic Church is one of Congo’s most powerful institutions, representing about 40 per cent of its 80 million people.

The ruling coalition of President Joseph Kabila, which is backing his hand-picked successor Emmanuel Ramazani Shadary, also took aim at Cenco on Thursday.

The coalition “deplores . . . the partisan, irresponsible and anarchic attitude of Cenco,” said Barnabe Kikaya Bin Karubi, an adviser to Mr Kabila and spokesman for Mr Shadary.

Observers and the opposition say the election was marred by serious irregularities. The opposition, represented by its two main candidates Martin Fayulu and Felix Tshisekedi, and Mr Shadary’s camp have all claimed they are on course to win, without posting specific figures.

The government says the election was fair and went smoothly.

The poll is meant to lead to Congo’s first democratic transfer of power, but the international community has raised concerns that a disputed result could cause unrest, as was the case after the 2006 and 2011 elections. – Reuters