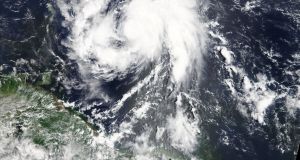 Hurricane Maria is shown in the Atlantic Ocean east of Martinique. Photograph: Nasa/Reuters

Hurricane Maria picked up strength and roared towards the Leeward Islands on Monday on a track that could whip several eastern Caribbean islands with their second major storm this month.

Maria has grown into a Category 4 storm on the five-step Saffir-Simpson scale, with maximum sustained winds of 215km/h. It was located about 55km northeast of Martinique at 11am local time, the US National Hurricane Centre (NHC) said.

“The centre of Maria will move near Dominica and the adjacent Leeward Islands during the next few hours, over the extreme northeastern Caribbean Sea the remainder of tonight and Tuesday, and approach Puerto Rico and the Virgin Islands Tuesday night and Wednesday,” the NHC said.

Maria was expected to be the second major hurricane this year to hit the Leeward Islands, which were hammered by Hurricane Irma earlier this month, the centre said.

Streets were flooded in some residential parts of the island of Barbados, which had been experiencing heavy rain since Sunday as the storm approached.

Maria was expected to bring storm surges of up to 1.8m-2.7m, the NHC said. Parts of the central and southern Leeward Islands could see as much as 51cm of rain, it said.

Hurricane and tropical storm warnings and watches were in effect for a string of islands in the area, including the US and British Virgin Islands, Antigua and Barbuda and the French-Dutch island of St Martin.

Several of those islands were devastated earlier this month when Hurricane Irma rampaged through the Caribbean as one of the most powerful Atlantic hurricanes ever recorded, killing more than 80 people on the islands and the US mainland.

Puerto Rico, a US territory which Irma grazed as it headed toward Cuba and Florida, opened shelters and began to dismantle construction cranes that could be vulnerable to high winds as it prepared for Maria.

“It is time to seek refuge with a family member, friend, or move to a state shelter because rescuers will not go out and risk their lives once winds reach 50 miles per hour,” Puerto Rico governor Ricardo Rosselló told reporters on Monday.

Some 450 shelters were open, including one in San Juan that was already housing people evacuated from nearby islands hit by Irma, the government said.

More than 1,700 residents of Barbuda were evacuated to neighbouring Antigua after Irma damaged nearly every building there.

The eye of that storm was forecast to remain off the east coast of the US for the next few days, bringing dangerous surf and rip currents to beaches from Delaware through Massachusetts.