UN General Assembly: What to watch out for this week

All eyes will be on Trump as North Korea, climate change and Myanmar top the agenda 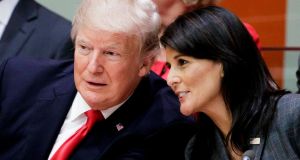 US President Donald Trump and US ambassador to the United Nations Nikki Haley. Photograph: Justin Lane/EPA

In many ways the 72nd meeting of the UN General Assembly will be all about US president Donald Trump, who makes his first address to the institution on Tuesday and is spending the week in New York meeting various delegations. He has previously dismissed the UN as a “club” for “people to have a good time”, and the world will be watching the tone of his speech as much as its content.

Heightened tension over North Korea’s nuclear activity is likely to dominate an assembly that takes place just days after Pyongyang launched its 15th missile test this year. Trump is due to meet South Korean president Moon Jae-In and Japanese prime minister Shinzo Abe to discuss the crisis. But the notable absence of Russian leader Vladimir Putin and China’s Xi Jinping – both countries have veto-wielding power on the UN Security Council – may make any substantive progress difficult.

A year after climate change topped the agenda at the general assembly, the focus will be on the US’s commitment to the Paris climate change deal. The White House insisted there had been no change in policy this weekend, following reports that the US was preparing to remain in the Paris climate agreement. Secretary of state Rex Tillerson said on Sunday that Trump was open to staying in “if we can construct a set of terms that we believe is fair”.

The plight of the Rohingya Muslims in Myanmar, formerly known as Burma, is likely to be front and centre at the assembly. Hundreds of thousands of people have fled the country for Bangladesh in recent weeks, reporting widespread violence. The country’s de facto leader, Aung San Suu Kyi, pulled out of the UN general assembly last week. The United Nations’s human rights chief has previously accused Myanmar of carrying out ethnic cleansing.