Violence erupted on the streets of St. Louis, Missouri after a former policeman Jason Stockley was found not guilty of the first-degree murder of Anthony Lamar Smith, shot to death in 2011. Video: REUTERS 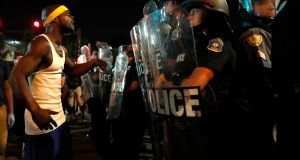 Clashes between demonstrators and riot-clad police marred the end of what had been a largely peaceful second day of protest rallies in St Louis following the acquittal of a white police officer in the fatal shooting of a black man.

Several hundred people gathered near Washington University after dark as the main rallies and marches wound down on Saturday evening.

As the night wore on violence broke out between some of roughly 100 remaining protesters, some holding bats or hammers, and riot-clad police who ordered them to disperse.

Shop and restaurant windows were smashed, including at businesses crowded with patrons, and demonstrators hurled trash cans at officers, who numbered about 200.

Police declared the scene an unlawful assembly and threatened to deploy tear gas and arrested at least eight people.

“We had been getting such a good turn out earlier and it was a peaceful protest,” said Jomar Jackson (32). “But then a bunch of people came and decided to be disruptive.”

Elisheva Heit, whose flower shop window was smashed on the eve of its grand opening, said “I don’t understand how this would bring the poor guy back to life.”

Sweeping up glass, she asked passing officers: “This is how you protect people?”

But as on Saturday, Friday’s protests ended in late night violence, with 33 arrests after clashes on which 10 officers were hurt.

“We don’t want to see property destruction or see people getting hurt,” Elad Gross, a 29-year-old St Louis civil rights attorney, told Reuters as activists gathered at another protest site in a park on Saturday.

“But this is a protest that addresses injustices not only happening here in St Louis but around the country.”

Rock band U2 cancelled a concert scheduled for Saturday in St Louis, and singer Ed Sheeran did the same for his show on Sunday, citing security concerns.

“Deeply saddened at what has happened in St Louis and having to cancel our show tonight,” U2 singer Bono said in a post on Instagram.

The verdict came about three years after rioting broke out in the St Louis suburb of Ferguson when a black teenager was shot dead by a white police officer. That incident touched off nationwide demonstrations over law enforcement’s use of force against African-Americans, the mentally ill and other groups.

After Friday’s ruling, some 600 chanting protesters marched from the courthouse through downtown St Louis, some of them holding “Black Lives Matter” signs.

Later, some broke windows at a library and two restaurants and threw bricks and bottles at officers, who used tear gas and rubber bullets to disperse the crowd. At one point, demonstrators threw rocks and paint at the home of St Louis mayor Lyda Krewson, police said.

Mr Smith was shot five times in his car after attempting to elude Mr Stockley and his partner, who had chased the suspect after an alleged drug deal, authorities said.

During the pursuit, the officer could be heard saying on an internal police car video he was going to kill Mr Smith, prosecutors said.

Mr Stockley believed Mr Smith was armed, defence attorneys said, and a gun was found in the car. Prosecutors argued Mr Stockley planted the weapon and the gun had only his DNA.

Mr Stockley left the St Louis Metropolitan Police Department in 2013 and was arrested last year. He waived his right to a jury trial.

“This court, as a trier of fact, is simply not firmly convinced of defendant’s guilt,” Judge Wilson ruled.

Mr Smith’s family settled a wrongful death lawsuit against the city for $900,000 in 2013, according to Al Watkins, an attorney for Mr Smith’s fiancée, Christina Wilson.