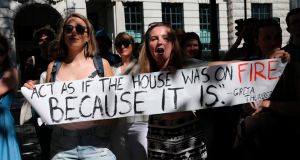 Protesters with a banner gather for a demonstration organised by climate change activists from Extinction Rebellion outside the Brazilian embassy in central London on Friday. Photograph: Getty Images

The European Commission has said it supports the call from French president Emmanuel Macron to discuss the Amazon rainforest fires at the G7 meeting in France this weekend.

“That is why we do welcome president Macron’s intention to discuss this during the G7 meeting. The sense of urgency is indeed warranted.

“We are in touch, as always, with the Brazilian and Bolivian authorities and stand ready to assist in any way we can, for instance by providing assistance or activating our Copernicus satellite mapping system.”

Asked whether the European Union would put economic or political pressure on Brazil to stop deforestation, Ms Andreeva said: “The best tools we have is the EU- Mercosur Agreement (an unratified free trade deal between the EU and the South American trade bloc) that actually anchors Brazil into the Paris Agreement for the first time.

“It is actually the first trade agreement that includes binding commitments to effectively implement the Paris accord as well as other multi-lateral agreements.

“It is a way of working with Brazil and others to push and encourage each other to live up to the commitments we have made together in the Paris Agreement and work together on other environmental issues.

“I think there are also instruments with regard to the enforcement of these commitments. I think this is indeed the best way to create legally binding commitments with countries which we want to protect our environmental standards.”

Emmanuel Macron, had said the fires in the Amazon are an “international crisis” and called for them to be top of the agenda at the G7 summit, prompting a furious response from Brazil’s leader.

“Our house is burning. Literally,” Macron tweeted, adding that the Amazon produced 20 per cent of the world’s oxygen.

Brazil’s president, Jair Bolsonaro, a right-wing nationalist who bristles at the idea of foreign interference in the Brazilian Amazon, took exception to his French counterpart’s comments.

“I regret that president Macron seeks to take advantage of what is a domestic Brazilian issue and of other Amazonian countries for personal political gain,” Mr Bolsonaro tweeted, targeting what he called Mr Macron’s “sensationalist tone”.

In a second tweet, he said: “The French president’s suggestion that Amazonian matters be discussed at the G7 without the involvement of countries of the region recalls the colonialist mindset that is unacceptable in the 21st century.”