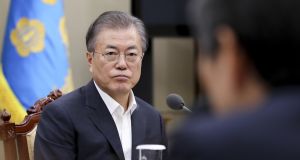 South Korea has scrapped a military intelligence-sharing pact with Japan, citing a “grave change” in security conditions after Tokyo placed export restrictions on its neighbour.

Seoul’s presidential Blue House defied expectations that it would maintain the agreement, which played a crucial role in a trilateral security alliance that also involved the US.

The decision will raise bilateral tensions, which had reached a new low this month after Japan removed South Korea from its “white list” of countries with preferential trade status.

The Blue House said on Thursday that it did not meet the “national interest” for South Korea to maintain the General Security of Military Information Agreement.

“We have determined that it would not serve our national interest to maintain an agreement we signed with the aim of exchanging military information which is sensitive to security,” said Kim You-geun, deputy director of South Korea’s presidential National Security Council.

The decision was made after an hours-long debate within the presidential national security council. It will worry US officials, who have stressed the importance of uniting their allies on regional security issues, which includes fending off North Korea’s nuclear threats and guarding against the expanded military activities of China and Russia.

The US defence department expressed its “strong concern and disappointment” in the move in a statement on Thursday. “We strongly believe that the integrity of our mutual defence and security ties must persist despite frictions in other areas of the ROK-Japan relationship.”, Lieut Col Dave Eastburn, a Pentagon spokesman, said.

The US had pressured its two Asian allies to sign the pact in 2016 despite strong domestic opposition in South Korea against military co-operation with its former colonial ruler.

Analysts said Seoul’s withdrawal would increase tension with Tokyo and weaken international support for its complaints against Japan on trade disputes.

“The Moon government may see this decision as domestically popular and as a symbolic, low-cost way of signalling resolve to Tokyo,” said Leif-Eric Easley, a professor of international studies at Ewha Womans University in Seoul, in reference to South Korea’s president.

“However, this move will raise international concerns that Seoul misreads the regional security situation and is presently unwilling to shoulder its responsibility for improving Korea-Japan relations,” he said.

Prof Easley also warned that South Korea’s decision might be viewed by Pyongyang, Beijing and Moscow as it being less committed to its alliance with the US, exposing it to greater regional friction.

Taro Kono, Japan’s foreign minister, said he was deeply disappointed by Seoul’s decision. He said the move “completely misjudges the current security environment in the region”.

Mr Kono added: “We cannot accept any of South Korea’s claims and we will strongly protest against the South Korean government.”

Bilateral relations between Japan and South Korea have deteriorated since last year after South Korean courts ordered Japanese companies to compensate victims of forced labour during the second world war.

Japan maintained that the issue of wartime forced labour was settled by a 1965 treaty when the two countries normalised ties. Despite US efforts to defuse those tensions, Japan imposed a series of export controls on products critical to South Korea’s tech groups. There are fears that the controls will damage the South Korean economy and threaten global supply chains. – Copyright The Financial Times Limited 2019