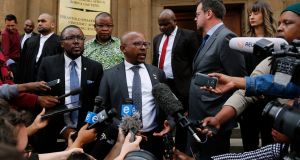 Nelson Mandela Foundation chief executive Sello Hatang: “We should not be poisoning the future through the gratuitous display of the old flag.” Photograph: Denis Farrell

Restrictions on public displays of South Africa’s apartheid-era flag have been imposed by a court in Johannesburg.

The equality court ruled on Wednesday that gratuitous display of the national flag from the era of white minority rule would constitute hate speech and harassment.

Judge Phineas Mojapelo said the old orange, white and blue banner would not be completely banned from public display, as its use was protected by law for artistic, academic, journalistic and other public-interest purposes.

But he said “displaying it is destructive of our nascent non-racial democracy . . . it is an affront to the spirit and values of our ‘ubuntu’ [a Zulu term for humanity], which has become a mark of civilised interaction in post-apartheid South Africa. ”

In April, the Nelson Mandela Foundation (NMF), a non-profit organisation founded by the former president to promote freedom and equality, asked the court to rule that displays of the old flag should be limited.

Displaying the flag became a matter of concern for the body after it was repeatedly waved during a “Black Monday” protest organised by Afrikaner lobby group Afriforum in October 2017 against increasing farm murders in the country.

South Africa’s human rights commission joined the NMF application, arguing that those who were intent on waving the flag or displaying it on their properties felt nostalgia for the apartheid days.

Afriforum opposed the application, arguing that to ban the flag would infringe on people’s right to freedom of speech and expression. It also argued that according to legal definition only words, not symbols and images, constituted hate speech.

In some Afrikaner communities, the flag is still widely used over South Africa’s new flag, as a way to promote white nationalism and intimidate black and mixed-race citizens.

Handing down his ruling, Judge Mojapelo said displaying the flag “does much more than merely cause emotional pain and stress to black people”. He said those who displayed the flag were consciously choosing “oppression over liberation symbols, with the intent to incite and awaken white supremacist” ideologies.

After the ruling, NMF chief executive Sello Hatang said the outcome could be considered a victory only when all South Africans began to overcome their differences and unite to make the country a better place.

“We are hoping to join hands with AfriForum, [Afrikaner cultural organisation] FAK and other parties . . . to say our woundedness should not wound the future,” he said, “We should not be poisoning the future through the gratuitous display of the old flag.”

South Africa’s old flag was used from 1928 to 1994 when the country’s first multiracial general elections were held. Following the African National Congress party’s victory in that poll, it was replaced by the current national flag.